The Carcano Project Part I 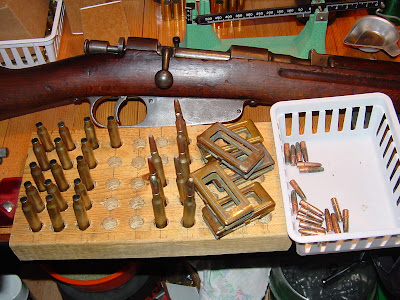 Walking down rows and rows of drunk rednecks and tables of guns(welcome to the Kenton Coon Dog Trials) we were on a mission. To stop my good friend from buying a 6.5 Carcano. That loathed Italian rifle for its supposed weakness and its "role" in the death of a president. And here we are trying to convince a friend to stay away from buying one. Ammo is not readily available nor is the brass and the thing could simply blow up on you. We rounded the corner of the next row and a shout came from behind us so we turned around. Running up to us was our friend with a 6.5 Carcano in hand and a smile on his face.....We had failed the mission and we were screwed. Looking over the gun it didn't seem all that bad it has a gain twist rifling and is a handy length and weight with simple sights. But I knew that I was going to have more to do with this rifle that I wanted to admit. After my friend purchased the rifle I did a little reading to get up to speed on the old fence post. Frank De Haas's book "Bolt Action Rifles, Revised Edition" came off of one of my shelves and the proper chapter was located. It's not an exciting read but is packed with great info. He states that the Carcano has always been downplayed as a weak action but the Italians never seemed to have a problem with the design. This little rifle was starting to not look so bad in my eyes.

Fast forward to a few months later my good friend and I have moved down to Columbus for school the three of us (my friend, his girlfriend and I) are all under the same roof. One night towards the end of the fall quarter my friend comes into my room with that little rifle on his shoulder and states that its time to shoot it. I start to tell him he has no ammo but then I stop myself and think for a bit......I seemed to remember being given a cigar box full off odd calibers not to long ago. I told him I would look and see what could be had. The next time I was home I went through the box and came up with 30 rounds of Norma 6.5 Carcano ammo that looked like it had really seen better days along with 6 clips (6 round clips). I brought the whole mess back with me and pulled bullets & dumped the powder and on my next trip to the ROTC range tested the rifle with just the old primed brass. The bullets and brass were tumbled and since I weighed all the powder charges of the factory ammo I could reuse the powder but at a reduced charge. Though some of the powder was wet and was simply thrown out. The charges were in the 39.5-40gr region so I knocked them down to 37gr to play things safe. I found the easiest way to pull the bullets was use the Rock chucker and with the proper shell holder run the ram up grab the bullet with a pair of pliers and pull the ram down. This worked very well and did very little damage to the bullets. The inertia puller was not working well due to the tight factory crimp/neck. I located a set of reloading dies for the rifle and with 9 1/2 Remington Large rifle primers set about reloading the pulled down components. Some of the bullets have surface corrosion from poor storage but that won't hurt a thing in the long run. The brass will be annealed after the first firing to ensure case life though more re loadable brass will have to be found eventually. A bullet mold was promptly ordered from a group buy and should provide a nice projectile to experiment with from this Italian workhorse.

A range report should follow. I'm still gonna strap this thing down to a tire and shoot it from a distance the first few times......just incase De Haas was wrong.
Posted by Wonderwolf at 10:33 AM No comments: Links to this post 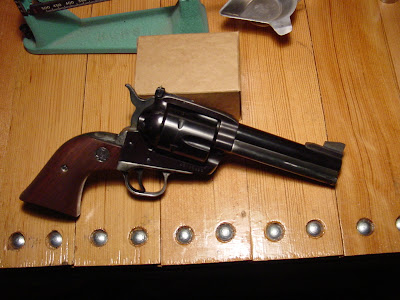 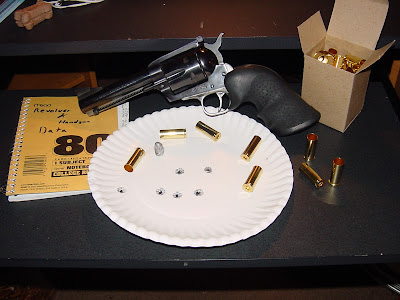 I took a bit of a step outside my comfort zone this past summer when I purchased a Ruger Blackhawk from a friend in 45 Colt for a whopping $250. I'm usually a S&W guy and love my .44mags but this was a project that looked fun. I'll say it up front this Ruger single action was in sad shape at the end of its 4 5/8th's barrel was a hack job of a front sight and the rear sight...well I'm not really sure if you would call it a rear sight at all. Also the frame was rounded at the front and back by one of the first owners. My friend had purchased the gun like that however hoping to have a short range cowboy gun to play with. When he sold it to me (less than 2 months after buying it himself, He mentioned it shot 18" high at 20yards) he included a new front sight from Brownell's and put the $250 I gave him towards a different manufacture 45 Colt an Uberti if I remember right. Not long after I got the gun a 45 Colt 3 die set was on its way after a want ad was posted on a few of the forums I frequent and 1k pieces of brass was inbound from starline in short order.

The first thing I did when I got home with the Blackhawk was knock the front sight off with a lead hammer and played around with some hip shooting with the few pieces of 45 colt brass I picked up over time at the range(didn't want to dive into the NEW brass just yet). Then the gun sat while I searched for a rear sight which I was not in a hurry for. The rear sight came to me a few weeks ago for $10 from a parts dealer at a gun show, it was a like new take off sight. Now I could put the gun back together. The rear sight was installed by the dealer at the show (to make sure it was the correct sight) and I had my Dad solder on the front sight using the rear sight to properly line it up. Not a whole lot involved in lining it up mostly done by eye. A holster was had for $3 but had to be cut down as it was for a 7" gun but works perfectly. Once I got the gun all ready I loaded up a sampler of 200gr SWC loads and some Ruger only 230gr RN loads to test out over the chronograph.

Using Unique and the 200Gr SWC I was able to get 980-1120fps out of the 45 Colt with little gain in speed after 10.5Gr of Unique under the 200Gr SWC using the new starline brass and CCI 300 primers. I had reasonably good accuracy with the group shown in the picture which was shot at 20 yards standing but with the original wood stocks that were on the gun from the factory. I've yet to try the Hogues that my Dad scrounged up for me but they feel so much more natural than the hog leg wood stocks.

I'm waiting on the 454423 mold from a group buy to be finished still. It's supposed to throw a .45 keith style weighing in at 244gr and is supposedly usable in a 45ACP as well. It should perform well in this nice little six shooter. I got a little impatient and purchased a single cavity Lee 252Gr FP mold this past weekend to try out next time I'm home and have the pot fired up.

The molds so far with maybe the exception to the 252Gr Fp (1911,magazine taper at front might be too much but we'll see) can all be used in my other .45's. I'm looking to develop a good bear load with this gun now and pack it with me on hikes as its a good gun to do that with and has enough power if loaded properly. Please refer to updated and tested load data before attempting to duplicate any of the loads listed. I'm not responsible for any damages on your part Yes it worked for me but your results may vary. The Boolit in the picture is that of a 230gr RN shot into dry phone books clocking 1000fps went in about 5" and ran out of steam.
Posted by Wonderwolf at 9:15 PM No comments: Links to this post

A Bench Built for Reloading, Not Work 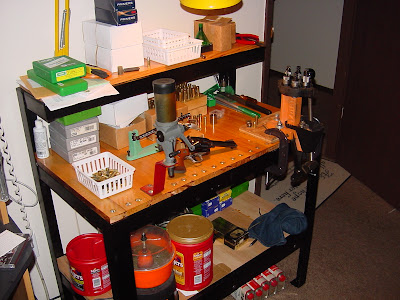 I Have been reloading at home for many many years. Unfortunately when I moved away for school I also moved away from my fathers workbenches, walls of tools, drill press & lathe, many presses, dies, books and so on, so fourth and such like. I started to ache for my reloading tools not long after I moved down to Columbus. I have my own single stage 50BMG press and Rockchucker, as well as dies for all my pistol calibers and some rifle. Lots of brass and the other accessories that go with the above. It was during a conversation with my welder friend that the idea of a custom bench could be built and outperform anything that I would pull out of the dumpster while on a diving expedition as far as using a regular desk to reload on and in lieu of this computer desk upon which I type on now. I measured the only wall space I had left and came up with some figures and sent them to Anthony. He bent angle from 4" flat stock and in a short 3 hours had a frame done up. On a trip to Menards we decided we were just going to use deck wood but while passing a "pre cut discount" bin that had tongue and groove wood flooring we figured it would be cheaper and finish A LOT better than deck wood. It took some time to get it all laid out and drilled. Not long after I brought it down (this was while I was home for thanksgiving break) and tore it apart and gave the top two surfaces about 4 coats of polyurethane and the frame a good coat of Semi gloss flat black rust-o-leum. With Anthony's guarantee of 600# on the frame I was not afraid to load it up for the needed weight. As this is a bench that can be moved by 2 people & a nice 20" x 36" footprint it needs weight while FL sizing 45-70 and .44 magnum brass that have been run hot. For what it is it has a generous amount of storage and work space. And will service me for many years to come however I hope that when I get my own place a much more impressive set up will take its place.
Posted by Wonderwolf at 3:33 PM No comments: Links to this post