There are few things in life that make more sense than to have a good rifle in the same caliber as your sidearm. There are passels of carbines, as they should be called as they are of a sub class of what would otherwise be a battle rifle, not for their physical size as the M4 "carbine" is called but as for their caliber to be had in nearly any pistol caliber one desires. This idea is not a new one, it just makes logistical sense to have a pistol and a rifle/carbine take the same ammo. The practice is sound, having to only worry about obtaining and carrying just one caliber such as .45 colt or two if .44spl/44mag is your choice as it keeps things simple....so long as you can obtain that one caliber at least.

The primary focus on the following concerns specifically the Ruger 77/357 bolt action carbine (or rifle if you prefer). The little 5.5 lb 4-5 shot package just at 38.5" overall has a lot to offer somebody who is looking for a rugged firearm to accompany them into the middle of nowhere which isn't a bad place to find oneself now and again. Mostly this post is focusing on the increased performance you can expect out of the longer barrel of such a handy carbine, the same could be expected from a handi-rifle, Contender rifle or lever action. The fact that this carbine features such a mild to wild caliber in such a rugged offering being it bolt action stainless gun with synthetic stock! Gives this little package a good deal of versatility when it is put up to say a wood stocked lever action that may have trouble feeding a large variety of rounds one may wish to put down the pipe.

Note- the previously discontinued offering of the 77/357 was blued steel....to my knowledge only stainless is being offered now.

All data was with using CCI primers and given in feet per second. The LCR was tested out of curiosity, not for serious comparison however it does show some problems that could crop up in load selection.

Note there are 4 velocities given for the LCR, the first 544 FPS  may have been a error of some sort, maybe the chronograph caught something other than the bullet, some shed lube perhaps. But the fact the 4th shot is so much lower than the middle two make me think either my charges were not consistent or we were having ignition issues with such a fast powder compared with case capacity and bullet weight. Something to keep in mind when wanting to use a given round across such a wide variety of barrels

This is a popular target load for the .38 Special, it seems the 2.7gr load is the staple for a lot of shooters. Not to mentioned highly economical as you get 2592 loads per pound...that is less than a penny of powder in each shot (I purchased Bullseye @ $18 a lb in November of this year).

This load I kind of just came up with, I had a lot of these heavy 160gr Wadcutters already cast up from a while back just needed a excuse to send them down range. It is interesting to note just how little difference there is in this load between the revolvers and the carbine....Though velocities were exceedingly consistent in the rifle there is only about 250 fps difference between the LCR and the carbine. My thinking is the powder being Bullseye it burns too quickly for the longer barrel to give it any sort of major boost one might be looking for as a benefit to toting a longer barreled version of their sidearm around.

No LCR data was collected due to our fondness with the feeling in our hands (Read, this load is stout in snub nose guns) not to mention accuracy was questionable since the chronograph was set further away than normal.

This bullet whose mold is offered by Lee is quickly becoming one of my all time favorite bullet selections available in the 38/357 realm. It cuts a nice clean hold in targets and is easier to load that most SWC bullets from a speed-loader into the cylinder of a revolver. It feeds easily in the 77 and offers a versatile all around bullet in the 158gr realm.


These were just some observations, testing will continue along with other bullet designs being added as time and equipment allows.  I plan to add some swagged projectiles to the lineup as well as a light 125Gr cast bullet, 173gr cast bullet, 215gr cast bullet and a .375 round ball pushed through a .357 sizer for plinker/small game rounds.

As I stated before I can see the sense in stocking only one caliber of ammo but you can quickly get into a lot of specialty loads if you deal with 38/357 or .44spl/.44mag  and want small game loads, shot loads and medium/big game thumpers. 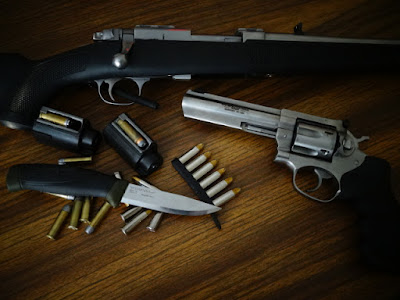 Posted by Wonderwolf at 8:05 PM No comments: Links to this post

I've been working on some  H&R Pardner shotguns and Handi rifles lately trying to track down the source of misfires and other such failures to perform as designed. The first hypothesis of the problem was presumed light firing pin strikes, possibly caused by short firing pin protrusion. Although this has turned out not to be the case with the two Handi rifles I am working on currently both rifles had shorter than minimum firing pin protrusion to be reliable. Having tried to measure the firing pins accurately proved a bit of a challenge as I was using the depth measurement on a dial caliper to try and get a measurement, this quickly proved inaccurate as one must hold the trigger to the rear while at the same time taking the measurement keeping the instrument perpendicular to the breach face. I knew there must be a quicker, easier and more accurate way to get the measurement I was looking for...and there was. Brownells sells a marvelous little tool that is comprised of 3 parts and costs $30. Yes, $30...so that wasn't going to happen any time soon. I happened to have a good stock of 0-1 in the shop so I set to work making a rough copy of the brownells firing pin protrusion gauge. Yes they make and source excellent tools but I wasn't going to pay $30 for something so easy to make myself.

Taking your 1/2" drill rod, drill a 1/4" hole about 1" deep, take cutoff blade and part so you have a piece about 3/4" long or so, this dimension is not critical but do make sure both ends are faced. Deburr drilled hole as needed.. About 1/4" or so from one end drill and tap a hole into the side of the cylinder for your set screw.

Take your 1/4" drill rod and accurately measure and cut off a 1.000" piece making sure both ends are faced. It really can be any length you want it to be so long as its longer than the 1/2" stub you made earlier. It would save you time and math in the future though if you just took your time and made it a accurate 1.000" long.


Tip- if you know you will be using this gauge on bolts with recessed faces it would be a great idea to turn the end farthest from the set screw hold down so it can sit inside what you think will be the smallest case head you might work with would be.


Simple tools like this make quick jobs of measuring critical things such as firing pin stick out on a firearm when trying to diagnose a problem. Though my issue still has not been resolved I have been able to confidently measure and eliminate the firing pin as a variable.

Posted by Wonderwolf at 7:32 PM No comments: Links to this post

"Ammunition Making By George E. Frost" ......My version of rare old comic books worth a lot more now then when purchased.

If there is one thing we all understand in the gun culture it is the term "collector" as it is used to define the varying degrees of our involvement in the various tasks of obtaining, cataloging, shooting..etc etc the firearms which appeal to us.

I have not considered myself a "collector" of books until I sat down to write this review and did some quick searching online as to where the general public could get this book. Then it dawned on me, I have never seen another physical copy of the book since I purchased mine new in the wrap some 14ish years ago I think for under $15 I'm sure as I was young and pocket money was scarce. So I must apologize ahead of time, if this review makes you want a copy of this book and you get sticker shock (cheapest I found was $179, going up to $400 quickly). To the point, I went back to the shelves and really just realized how many books I have I could review but this one seems a natural step in the progression of learning about reloading so I will review it anyways. Note: There are E-book type downloads and copies that can be had very CHEAP...at the risk of spoiling the review....I recommend going the E-book route unless you are looking for investment grade publications??

The book in question is "Ammunition Making" By George E. Frost 1990, published by non other than the NRA...they could use some sense and print up a few more copies of this book and sell them for a steal at $35 a copy and negate the need for the twice a month phone calls I get asking for additional funds to fight the good fight. Yes, right the book.....The book itself is a 161 page mind blowing look into how a lot of things we take for granted in the shooting community is made. The index is very intriguing and is covered as follows with sub categories omitted for brevity

I could rave about the depth and usefulness of the information this book covers for pages and pages but I'll try to keep it short. If you have a interest in learning how small arms ammunition is made, the actual physical process of forming the various components, including the Clay birds mind you (though only a page and some change covering that topic)! Then you will find this book exceedingly delightful. It could be a book you pick up every so often and reread sections on how this or that is made so you better understand the industry standpoint on a massive production scale. But I'll be honest I read the book when I first obtained it, absorbed all I could at the time and have not looked at it again until now. Re-reading it I have a better understanding of some processes. Especially after having started swagging my own bullets and modifying cases for reloading.

You do not have to reload to get this book and enjoy it, you merely have to have a interest in production methods and small arms munitions really.  The information this book divulges is worth the money I originally paid for my copy.....though I could not see paying more than $35 for a copy when electronic versions are available....its a really great reference work however to the average shooting Man/Woman the book is out of reach at the price the "collectors" have positioned it at in the market. Too bad really as it is a wealth of knowledge that should be out there in the world more readily available. Hey NRA!....wanna do a reprint?? 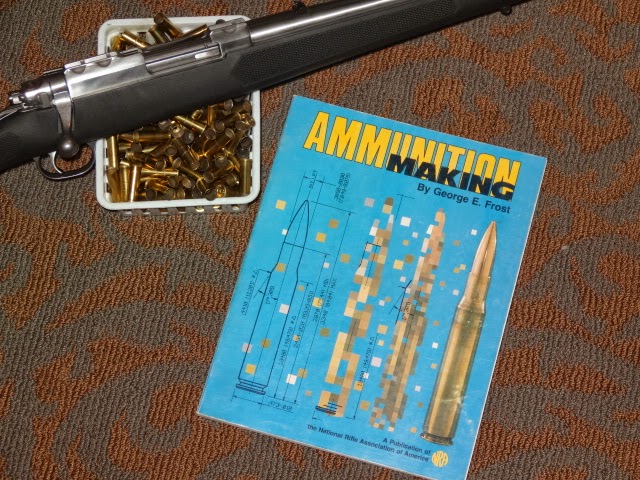 Posted by Wonderwolf at 7:21 PM No comments: Links to this post