As the weather here in Ohio continues to stay warm albeit wet I've been getting as much range time in with various kinds of tinkering and load development before we hit single digits and the wind makes things miserable out there. One particular load that has been surprisingly accurate so far is a .38 Special load sporting 4gr of red dot and a 125gr cast hollow point Mihec mold # 360640. This bullet has performed well on ground hogs with 4.2gr of red dot. When I went to load up a batch of these my Lee loadmaster powder charger was set for 4.0gr of red dot which is used in a 9mm load I use. So I thought for just plinking I would try 4.0gr in lieu of 4.2gr and see what happens. A broad range of charges have been tried in my GP-100 and it seems to like them all really. Below is a 5 shot group shot using the Weaver k2.5-1 scope shown previously.

Not much lost (or gained?) going from the 5" barrel of the GP-100 to the 3" shorter barrel of the LCR. This load is very mild but may be considered a +P round depending on the manual you are referencing.
Posted by Wonderwolf at 8:28 AM No comments: Links to this post

We are pretty spoiled in the handloading and bullet casting communities these days. Whatever we seem to dream up a need or want is made by some industrious individual or company. Need a faster way to make brass for your .300 blackout...bam somebody makes a jig to use in a tiny saw that cuts necks off of cases 10 times faster than a traditional tubing cutter takes to do 1. New ideas are always coming out as the market is in a constant state of flux. Sometimes however its not a new thing that gets us all excited but a revival of a previously "obsolete" product or design especially in cast boolits can get us really going. A number of  bullet mold companies are making limited runs of molds that were once a stocked item by RCBS, lyman, Hensly &  Gibbs or what have you. Once in awhile certain designs of cast bullets fall out of fashion for one reason or another after some time, new caliber comes along and bumps it off  or something along those lines. Some old timers post some pictures of these hard to find bullet molds, their product and the results on paper and game and us younger guys start drooling, then fight for the few that show up on ebay like it was for the honor of a woman.

There are a good number of companies out there willing to produce whatever bullet mold we seem to dream up within reason. So far the only two I have had the pleasure to obtain molds from have been N.O.E. Bullet molds  here in the US and MP- Molds  located in Europe. Both companies make molds that are flat out works of art. I will post a overview of one of MP (a.k.a.-mihec on the castboolits forum) molds sometime in the near future as time allows.

One recent limited production run of a semi custom was commissioned by a fellow who wished to see a multi cavity mold made to readily produce a hollow pointed version of Lymans old 358432 type III wadcutter bullet.  A number of molds had to be spoken for before the tapped company (NOE) would order the tooling and begin production. After all it does cost money to produce these items and the company needs to recoup their tooling and set up costs so a modest minimum number of molds spoken for ahead of time is common. This route for a custom mold is cheaper and the product lasts longer than some other mold options that are out there for custom cut molds. The catch here is its a "group buy" format.

The process is not fast, it takes a certain amount of patience to get through one of these "group buys" as they are called. But there is little to no regret when the mold you have been yearning for finally shows up at your door. As I continue to develop loads and mess with various bullet designs for .38 spl and .357 mag I must say that this particular hollow pointed version of a wadcutter caught my attention. I already have a 4 cavity mold that produces excellent solid bullets around 160gr in weight. These are solid thumpers and I have no doubt they would be just fine for deer or other small to midsize game at reasonable distances but when the opportunity to try a hollow point mold came about I jumped on.

Specifically I was looking at getting a bullet mold that would offer greater versatility than the 4 banger I had that could only make solids. I sprung for the 2 cavity mold, it came with pins to make a deep hollow point, a shallow hollow point and a "flat" which is just the same as the solid that I already have. A short time after the mold arrived I had a good size sample lot cast up of the large hollow point version. Sized a lubricated with Carnuba red I loaded up test batches in .357 magnum and even more in .38 special. Pistol results were promising but more work will need to be done for the rifle loads as they were producing some erratic patterns.

The various pin sizes obviously alter the weight of the bullet, the large hollow point pins bring the bullet in at around 148-150 grains. Not a heavy weight really but when you look at how a type III wadcutter is designed so that a portion of the nose sits above the case mouth your load options change a little over just the standard 148gr wadcutters. 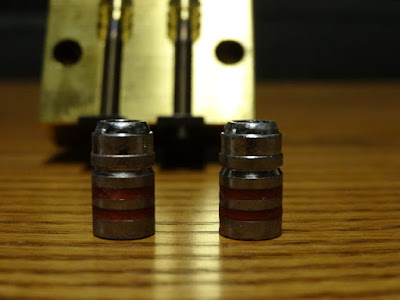 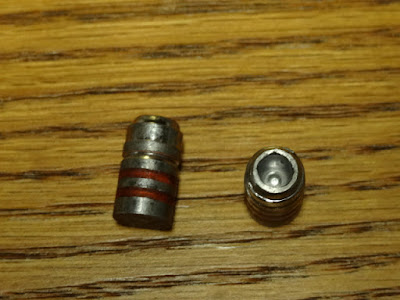 Trying to keep the Ruger 77 .357 Mag carbine slim and simple.

Day after Christmas there isn't much to do but head to the range of course. I was surprised when I hefted my 77/357 carbine in one hand and a stock 77/357 in the other the weight difference between the two was exceedingly noticeable. Curiosity got the better of me and the postal scale came out when we returned home. The pistol caliber carbine is meant to be a light easily handled short range rifle not a full weight target rifle but with scope, sling, 4 magazines (unloaded) pull through, stock pouch/cheek rest and the rear adjustable sight I installed, my carbine came in at 7 lbs 13 oz. WOW my carbine got FAT since high school I thought. A good chunk of added weight is in the scope which I don't use too often (yet). The weaver K 2.5 power on factory Ruger rings is a fantastic little scope for this type of carbine and it is also adding 1lb of weight with rings to the gun. So that means on my gun everything minus the scope/rings I'm still at 6 lbs 5 oz. Its amazing how fast weight adds up, an oz here oz there the 4 unloaded mags don't weight much but they still add 1/2 lb to the package.

For comparison I weighed the stock 77/357 and it came in at spec sheet weight of the naked gun. A handy 5 lbs 8 oz. Its not surprising I know to understand that when you add stuff the weight goes up but you want to keep in mind if you intend to go afield with a rifle you've added a few accessories to you don't want to be surprised by how much weight she's gained since you really carried her last. Food for thought. The good thing is we're not as bad as the tacticool crowd here and adding a whole lot we don't need, 4 mags for this carbine may be a tad excessive by 1 or 2 perhaps but overall everything that was put on was put on for a reason and is used. Now if I can only figure out how to mount a on-board GPS night vision fish finder I'll be the coolest...

I'm not overly concerned with weight but its just an interesting thing to keep in mind. For comparison the Savage AXIS economy rifle with scope weighs 6 lbs 8oz and a standard stock AR-15 with no junk weights about 7 lbs 2 oz. 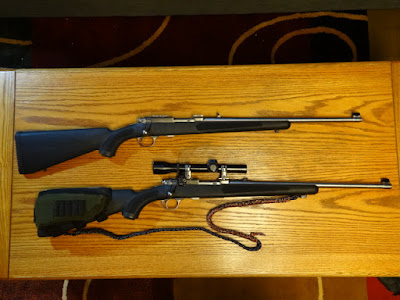 For those who are interested the scope is a vintage weaver K2.5-1 with micro-trac cross hairs. I have several such older low power K series weaver scopes and though I do not often employ the scopes they are great for applications such as this.

Posted by Wonderwolf at 6:38 AM No comments: Links to this post