Putting Out The Red Carpet for New Shooters.

Note- This post has been edited from its original version.

*They do not have any safety's-Which if you think about it is beneficial for our use. We want to keep everything simple here. including the amount of functions the firearm has like various levers, switches and buttons on some makes of guns can be daunting to the uninitiated. The more you try to throw at them the more they might get frustrated.

*They are safer than automatics-After a round is fired the action must be cycled in order for the next round to come into battery. In a automatic all that is needed is a slight release on trigger pressure and reapplication of pressure to fire again. This could result in accidental double or triple taps...I did it the first time I shot my dads .45 1911 when I was young. Its just not a good idea. The obvious option to this is to load 1 round at a time. This is a good idea as it will familiarize the shooter with the weapon and its workings fast. But a standard revolver is just impossible to accidentally double tap with normal target loads and a new shooter. Or any loads for that matter.

*Smoother action- Firing single action a revolver has a much smoother trigger pull than 95% of the Semi auto guns I've handled and shot. There are very few times double action is required in firing. Being charged by a bear or the occasional zombie is the exception.

*Super reliable-A revolver can handle light loads up to red line loads without fail of action. In a semi auto the ammo must be in good condition and powerful enough to cycle the weapon without being too powerful to crack frames and break parts. The revolver will eat anything you throw at it and more. you can load the cylinder of a revolver with full wad cutters, Semi Wad cutters, Round nose and bird shot loads and it will shoot one right after another without fail. Try that with a semi auto and you will give up in short order.

*Takes time- A revolver forces the shooter to slow down esp when shooting single action. It isn't a race...seeing who can throw down more lead never makes for good practice. Though speed loaders are made for revolvers its not the same as a auto shooter blazing one mag away after another. Also have the new shooter remove their finger from the trigger after each shot after they are acquainted with the weapon. this helps burn in good finger placement on the trigger. You can take this one step further and have them set down the gun or just remove it from their strong hand grip after each firing. Load 1 round in the cylinder at a time perhaps. This will cause them to make a habit of how they place the revolver in there hand. As well as getting used to loading and unloading to the point it is second nature.

*Ergonomics- Revolvers tend to have a better selection of grips available than with auto loaders. Look at your hand, its not shaped like the grip of a 1911. The small grip I have on the 63 works well esp for female hands. The magazine wells of pistols tend to dictate grip size and shape. Revolvers do not stick to this rule at all. This is why rounds like the .45 GAP emerged as a way to make a smaller slimmer grip for females in guns like the Glock.

Some additional tips I would like to add. Don't force a new shooter to shoot any particular gun. They loose interest if they are not having fun! DO NOT I REPEAT DO NOT give a new shooter a large caliber firearm. I keep seeing these videos online of guys given new shooters esp girls large guns like 12ga loaded with slugs or .50AE Desert Eagles. They end up hurting themselves /create a dangerous situation. Guy with the camera almost always laughs. yeah ok its funny if you get a guy who thinks he can handle a .375 H&H after shooting some .22's but thats a ego thing. Its just not cool when you are putting it on the unsuspecting and telling them to just "HOLD ON". Thats the kind of thing that turns them away from the sport. (end rant) At the end of each range session ask them what they learned today. I've been asking this for 2 years now whenever I'm acting as instructor.....you yourself can learn a lot from feedback. It also allows the trainee to reflect on what they have learned.
Posted by Wonderwolf at 10:17 PM No comments: Links to this post 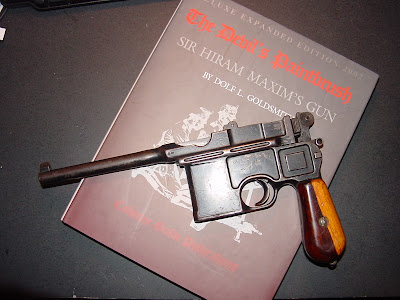 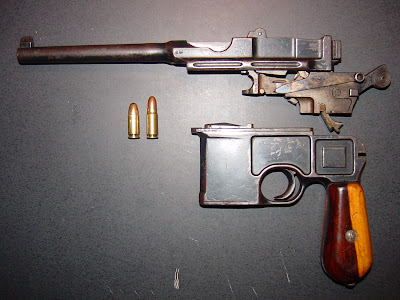 I went home for the weekend a while back and picked up this C96 broom handle Mauser pistol. Originally in 30 Mauser (The 30mauser was the most powerful pistol round until the .357 Magnum came out, It is a longer 9mm necked down to 30cal). Upon closer examination of the weapon the barrel is shot out....bulged and no rifling, Extractor...gone..along with the rear sight..Other than that its all there and matching numbers as well..woot.. ( I did notice all of this before I put the money down...just so you know). The grip seems bent but that isn't gonna hurt anything any time soon.

I plan on lining the barrel to 9mm luger as many of these guns were chambered in that round and little work will be needed on the full conversion. The case head is near if not the same dimensions for the bolt as the 30 Mauser. The internal magazine will work just fine with 9mm luger. If it does not I can mill some extra followers and mess with those. Do not want to alter the frame too much unless I deem it needed for function/reliability. The gun NEEDS a good cleaning along with a chamber casting to make sure there are not any greater flaws inside that I can't detect at this time. The C96 is the first truly reliable auto loading pistol and I hope to get this one back into working order in short time. Theres a lot of history behind these and I might post some more on the gun and its model history down the road.
Posted by Wonderwolf at 11:13 PM No comments: Links to this post

The cat came back the very next day...jk...make that two months later 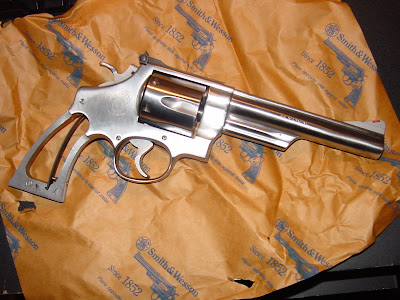 The new quarter started only a few weeks ago and I sure do feel like I've hit the ground running. Over break I worked for UPS on the trucks delivering all your presents and gift baskets but when the season ended so did the job, out of a job I'm on the hunt once again and its slow going. I would also like to tell a bit about a girl whom I am dating but I'll save that for a later post dealing with what guns (revolvers, pistols and rifles other than the ROTC match rifles) you should start Girlfriends out on ( she is truly an amazing female..and the president of the Rifle club). Right then...to the business at hand

As I mentioned in an earlier post about my favorite revolver being sent back to Smith & Wesson for repairs on the hammer and trigger stud. I was getting a little antsy when after almost 2 months the gun had not shown up and in a letter that was sent to me it was stated that it would only be 2-3 weeks. Well I called S&W yesterday and much to my surprise I was told the beloved revolver would be at the doorstep the next day (my hometown house not my apartment, But my dad was going to come down to see a friend in the hospital and brought it down for my inspection). I am happy to say that the sixgun seems to be in fantastic working order however I can't really say that for sure until I start tossing lead around with it. This poor revolver has been through a lot with me and my experiments with various hand loads of lead, shot, wax, bullets with condoms (jacketed) and some things I won't admit to shooting out of a revolver HOWEVER none of this was contributing the breakage that occurred. It is my go to revolver and unless I pick up a .357 Mag that balances and shoots better at long range I will not be letting go of this baby any time soon. It's toppled many steel targets at 200 yards by both my hand and others who wish to try it. It has served me in combat matches and on many road trips as well. I will run it through its paces and make sure its just as reliable as it was before it went belly up on me from a bum steel cast in 1985.

On another note the 6.5 Carcano project is moving along I didn't blow up the gun and it hit a paper plate at 100yards "ok" but I think we can do better. Now to process the brass and work up a load with the 6.5 mold after I get some cast up and sized so on and so fourth and such like. I also picked up another project at the local gun show and I'll post something on that later this week if my class work does not drown me first.
Posted by Wonderwolf at 8:25 PM No comments: Links to this post