You tell them....Valdez is coming :or: Sharps Long Range Express 1874... Buffalo not included! 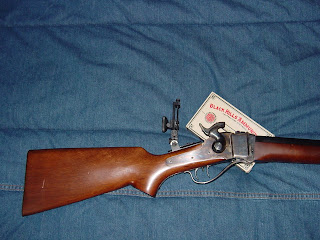 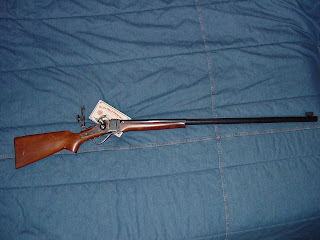 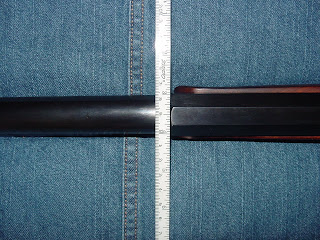 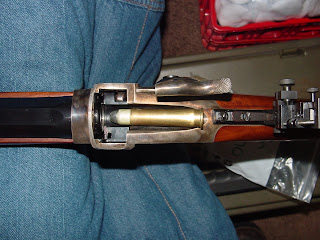 I've been burning for a Sharps rifle for a spell now and after somebody on one of the online forums I'm on gave me the name and a email address of his friend that had a Sharps along with a good size package of gear for sale I jumped on it. At 12 pounds and some change it is a weighty rifle though almost the same as my .22 match rifle it balances a little different. With a 34" half round half octagonal barrel and a 1:18 twist and a overall length of just under 51" it's not for somebody who likes light short rifles. It is chambered in 45-70 for now (possible re-chamber down the road to 45-90 at least,for that little extra velocity) and slugs out to 457 grooves and 447-448 lands (bore daim, which is important for paper patching) there seemed to be a tight spot near the chamber throat when pushing the slug muzzle to breech. Right now I have got things figured out to paper patch boolits up to .450 but until I have a chance to take a chamber casting of the rifle I have reason to believe the throat will not accommodate patched boolits all to well without a little lapping to knock imperfections out of the throat...i.e. sharp angles. The rifle is fairly new with few rounds down the tube. It came from an older gentleman who wished to thin out his collections to just bench rest rifles. At 74 years old and the presence of the thick recoil pad on the rifle when I got it I do believe he might have had issues with the recoil. However this I can not be sure of as I've known many older gentleman who will shoot anything you hand them. The rifle also has a Pedersoli mid range sight 2" staff along with an adjustable hadley eye cup. A raised cheek piece, double set trigger and shotgun stock were all things I was looking for in a Sharps and this fulfills them all. The Rifle is Pedersoli made and was sold through Cabelas as per the stamp on the barrel. My plans for the rifle right now will be shoot the loaded ammo that has come with it and try some of my patched and grooved bullets in it. I would like to have a 550gr or slightly lighter postell/creedmore bullet mold obtained or made for it as well as something comparable for paper patching. The fitting of the wood to metal is rather good on both forearm and stock. The only thing that I might alter down the road is the butt piece with has a little metal overhang on the toe of the stock and could cause premature wear on shooting clothing, mats and cases....its not that big of a deal but is rather something that I might do to make it just that much better. The lock up of the action is like that of a bank vault. Though one must get used to re-cocking the hammer after each shot to prevent damage to the firing pin and wear on the case base. Along with the rifle I was supplied with a goodly amount of brass, loaded ammo, dies and other things. I'm not sure how well the 500gr grooved and patched boolits I have on hand will perform but I do believe a heavier projectile will be subtable for all around use in this long barreled big bore.

A range report will follow soon I hope as the weather here in central and N.W. Ohio has finally started to warm up. I'll attempt to do some gong shooting this weekend at various distances up to several hundred yards if things show promise.
Posted by Wonderwolf at 12:06 PM No comments: Links to this post