Squirrel some spares away today : or : It's better to have it and need it than..... 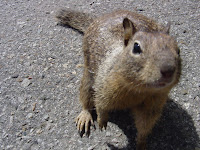 Often times when you look at purchasing a new rifle or handgun you may factor the availability of spare parts, magazines and other accessories into your considerations of which type or brand to purchase. Purchasing spares and extra parts as well as magazines will keep the firearm running for many many years even perhaps decades after the factory has closed up or importation of more parts has been banned etc. Just about the only guns you may not have to worry about buying extra parts for I think would be the Mosin Nagant and the AK-47....but in reality you would do well to have a spare complete bolt and misc small parts etc.

If you buy a new factory firearm you most likely will get a magazine or two and maybe a multi tool to adjust sights and break down and possibly service the firearm. That is usually all you get when they box up your gun and head to the check out. You could opt to buy some of the magazines stocked at the shop but I've rarely seen affordable full capacity magazines at a gun shop.
Once you get your firearm and get to the range for zero's and familiarization I would suggest you start researching what parts are common to failure in the design. Though you should have done this step of researching design flaws and part failures ahead of time there are few designs that are flawless....if any. Once you identify prone to failure parts stock up on these parts in triplicate at least (remember one is none, and two is one). As well as a full spring kit i.e. mainsprings and the smaller springs that are easily damaged or lost if the weapon is broken down far enough. For pistol parts I would mostly just say extra extractor, complete spring set and firing pin as well as a spare barrel if able. Rifle parts like the AR-15 family, M1 Garand/M1A, M1 carbine etc I would suggest a complete bolt or two if you find them at a reasonable price. Extra gas rings (on top of the complete bolts) for the AR-15 as well as firing pins and the small parts you tend to loose when you take the thing apart too many times/too often (which happens if you are teaching a lot of people how to use it). Also parts that can be easily damaged like gas tube, op rod etc accidents do happen. 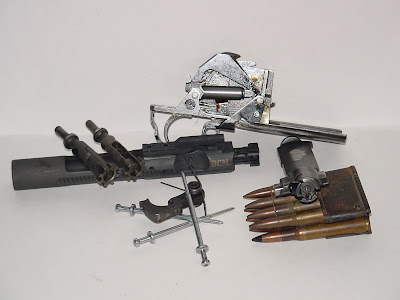 Spare parts should be obtained to insure your firearms will run at least until you run out of ammo.
The author recommends triplicates of some spare parts Some may be hard to find down the road like original M1 Garand and carbine bolts.


Revolvers? Don't worry about spare parts for these, maybe a extra spring kit but if you don't know your way around the inside of a revolver....stay out. If you know how to work on these then you know what rarely fails and what you need to fix it. 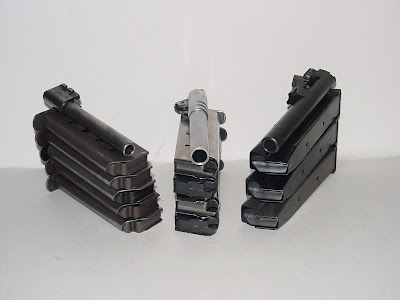 Springs, barrels, firing pins and ejectors should be set aside to keep your handguns running as well. I recommend the barrels only if you can find them cheap. I've put some spares away for my CZ-52 which I only have corrosive ammo for but at $10 a pop for stripped barrels its a investment that may prove wise if I forget to clean the barrel just once.What about magazines? how many should you get? what kind/brand? If you have rifles/carbines like the mini-14, M1 Carbine, M1A, AR-15/M4, AK-47, CETME/G3/HK91, FAL or any other rifle commonly used by the military or police you are in luck. There is a good chance that magazines and parts will be more common for these as they are in wide use (duh) kinda like parts for the F150 and common Chevy trucks. There are so many brands of mags (most notably for the AR-15) out there these days and you can get some really cheap...but you really do get what you pay for unless your buying surplus in bulk. Stay away from anything that isn't military surplus or manufactured by a reputable company. Don't think I'm joking on this...I have a few steel magazines that have no markings on them whatsever (manufacture wasn't even proud enough to mark them) they were too wide to fit in my AR. For non military i.e. aftermarket mags for the AR-15's I go with C-Product for my 30 rounders*. They (C-products) are great mags at a reasonable price (About $8.00 each). Once in a while a "lot" of a dozen or so military issue mags will hit the forums for really cheap. These are usually military contracts that have had a lot of use. Not all have anti tilt followers but that's a $0.75 upgrade easily done. Last bunch I purchased was a "lot" of 13 @ $3.84 each shipped. Only 1 had a updated follower so I'll end up replacing the other 12 with new manufactured followers. Still 13 very usable mags for a good price ($50 total) after I proof them in the rifles that is. So how many mags should you have on hand for a rifle? You may not think that there will be another AWB or revolution or any such thing that requires you to have massive amounts of mags on hand but you should still have some common sense about you. If you have a military type semi auto rifle you will want at least 6 full capacity magazines and a few short capacity magazines (so long as they are physically different...if not don't bother). I like to have some 20 round mags for my AR on hand for shooting off the benches or shooting prone or offhand. But I've also needed to have full capacity magazines for matches like the NTIT or "rattle battle". If you are going to spend $700-$900 on a rifle don't short change yourself and get one extra 30 round mag to go with it. 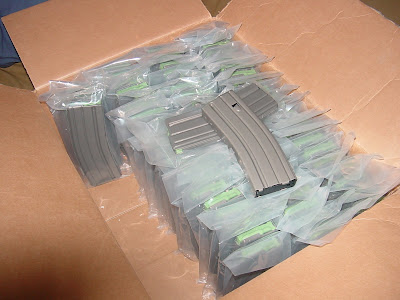 During the last presidential election I got a group of people together and we went in on purchasing a large quantity of high quality AR-15 magazines. With new AR-15 in our collections and new AR owners we wanted them to get the good stuff for a good price just in case any new bans were put in place. These are C-product 30 round magazines had from copes dist who has them for a great price. Same price if you order 1 or 100, with flat rate shipping. I have no connection to the company other than being a satisfied customer.
Determine how many magazines you want to have on hand for your firearm. The authors general rule is to have minimum of 50 rounds of magazine capacity for pistol and 100 for rifle/carbines.


*P.S.   C-Products has been out of business for more than a year now as of this update (5/2012)
If you are in the market  for 30 round magazines I would just stick with the military used magazines at this point but don't pay more than $10 for any 30 rounders, unless you require preban magazines.
Posted by Wonderwolf at 4:16 PM No comments: Links to this post