$12+shipping....that is what a replacement aluminum backplate will run you as I found out not too long ago. I had called TacStar who's parent company is Lyman to ask about some replacements for some equipment I needed to service and I was kind of taken aback at the parts cost. Especially when the sidesaddle cost me around $30 to get in the first place. I do realize that there are other companies out there that make similar sidesaddles however the TacStar is the most effective design I've seen so far as far as cost and utility.

$12+shipping might not seem like a lot to some of you but here is the problem. The backplate stripped out during "normal use". I did not over tighten the screws and so far as I know I did not abuse the back plate. it simply gave up the ghost under normal conditions. So if it strips out once getting a replacement for a shotgun I might have to bet my life on someday for a item that has already failed once is not really something I'm gonna put money down on. Instead we'll do our best to improve it.

The idea to upgrade the backplate came to me after I got off the phone with the nice lady at lyman and looked at exactly how thick the plate was.  "Some kind of T-nut should work" I thought so I came up with the idea to modify the stripped out side saddle to accept a stainless steel bushing/nut that would still allow the use of the screws that came with the side saddle.

I'll test the upgrade extensively before I modify my other shotguns sidesaddles the same way but I doubt I'll run into any issues. I'm not sure yet if I'll epoxy the bushings in place. Taking the gun apart in the field and losing a busing would be a bad time for sure.

The pictures below pretty much explain whats going on.

Note- this upgrade can probably be done (should be?) on all of the TacStar sidesaddles. The work on the side plate could all be done on a drill press but for the bushings you really want a lathe.

We'll see how well they hold up next weekend as I plan to put the shotgun this one will be mounted on through extensive testing as I've put a new barrel on it recently (20" smooth-bore with rifle sights) and want to get a good zero on it before I put it in the rotation. 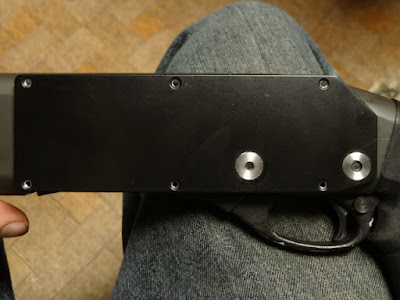 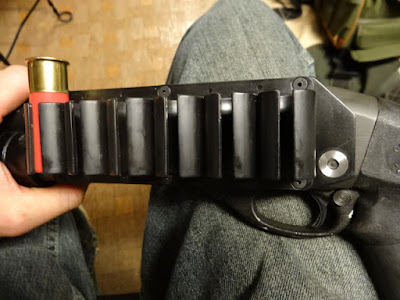 Posted by Wonderwolf at 4:54 PM No comments: Links to this post