I purchased a Mosin Nagant while I was in high school and (engage old man voice) I can remember when ammo cost $105 for a case of Bulgarian light ball, 1200ish rounds to a case...if I wasn't making $50 a week I guarantee you I would have purchased more, though I think I was into my Mausers and 8mm a lot more than the 7.62x54R and the 91/30's at the time.

Today, we have seen prices fold a few times over and for a while there in 2009 .223 Rem, 9mm Luger, .380ACP and 45ACP could not be found without really REALLY paying for the privilege. Walmart was the center of the great ammo rush after the presidential election...everybody was either complaining they couldn't find ammo or that they had just scored 6 precious boxes of ammo (in most areas walmart limited 6 boxes per customer). Federal bulk pack rimfire 550 rounds went up only slightly in price (from $14 to $15ish). My hats off to Walmart for not taking advantage of the situation and charging $30+ for the bulk packs like most online stores were. So lets say during all these record braking months of gun sales you manage to secure one or two precious AR-15 type rifles for fear weapons ban might be coming and you could be grandfathered in. But now you can't find ammo for the rascally thing! what now? Perhaps you have a small stash of rimfire ammo on hand that you use for your 10/22 or S&W 17 or k22. If you still have some money left over after buying your AR-15, a few quality magazines (which shouldn't cost you more than $9 a pop for 30 rounders these days) and are waiting for your back-ordered .223 Rem/5.56 ammo to show up you may want to look into a conversion unit for your rifle for training purposes. I happened along a M261 military conversion unit online one day that someone from the castboolits forum was selling. I think I gave somewhere around $100 for it with two magazines.

Its just a simple bolt swap to change your center fire AR-15 or M4 into a rimfire plinker. Now there are some drawbacks to this conversion...accuracy for one can really lack as the twist rate on some rifles and carbines 1:7-1:9 can be more than twice as fast as what you usually find on a .22 rifle or pistol which is around 1:16. If you have a older A1 upper with the slower 1:12 twist rate this may work better for these rimfire conversions. Also the bullet to barrel fit is a little off, Rimfire bullets are around .221"-.223" and the bores are about .218". I have not confirmed this number in any of my guns however. Other than slightly sloppy accuracy you will have to worry a bit about what bullets you shoot, I've heard that just plain lead bullets can foul up the gas works, I use copper washed federal bulk pack in my AR (actually nearly all my guns)and have not experienced this problem with them. The rifle is touted as self cleaning but I run a bore snake down the tube about every 200 rounds of rim fire to keep things from building up. 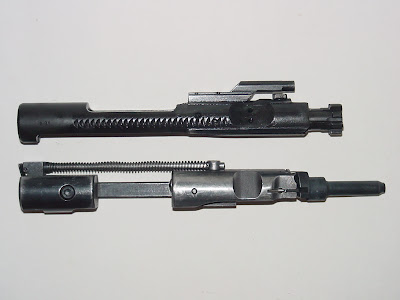 Above -M261 conversion- Just swap out with your center fire bolt. I put a thin film of small arms weapons lube on the chamber insert so that clean up is a simple wipe down with a shop rag. And my AR chamber gets hit with a chamber mop. 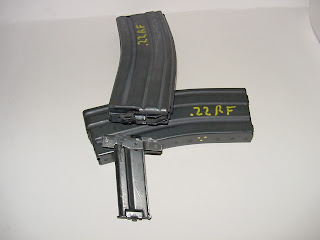 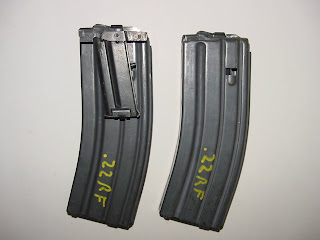 I've used two lesser quality 30 round magazines for dedicated M261 magazines and keep them marked as such so I know what I'm grabbing when I put stuff together for the range. These mag conversions have worked very well for me. I wouldn't eject them (the magazines) from the gun while standing though, That could be detrimental to their service life if done frequently I imagine. Keep this in mind if you're into tactical training.The only draw back is there is no bolt hold open so if I practice rapid fire strings I can't drop the bolt on the 8 round magazine, I have to charge it. Black dog machine makes aftermarket 10 round and high cap magazines which from the reports work very well. The black dog mags are also on sale on their website at the time of this writing (I have no affiliation with the company). Since I'm only using my M261 to teach AR-15 familiarization to my students (not sure what else to call them) and to work on my high power position and get some practice indoors I'll stick with the two steel mags I have. I feel one important role I have in the firearms culture is to familiarize people who are new and willing to learn with firearms they are most likely to come across or own. 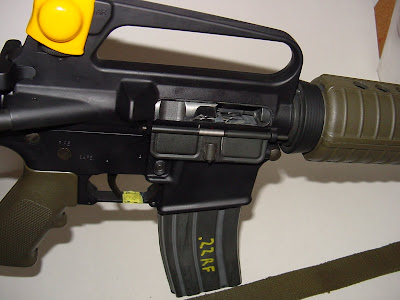 Above- Installed with magazine in place. The bolt hold open/release does work but the bolt will not lock back on the last shot. As you may be able to tell the bolt locked back is not far enough back to pick up a round upon its release, so the weapon must be charged prior to use.


Though there are other conversions units for the AR/M-16 family I'll stick with my M261 for several reasons. It's in use by the military so surplus parts will be available on the surplus market if I need them. And it is not a proprietary design with only one source of parts and service like you may get with some other units. Olympic arms commercially makes this unit and supplies parts at a very reasonable price (I've ordered a chamber insert from them as the first one I had was cracked which happens after so much ammo is sent down range). Sarco inc also has parts but they are priced more than Olympic arms which are new and from a known source. This unit has been out for a while and the military service manual is online in PDF for free which I downloaded and printed off. If you find any conversion unit for a song I would suggest getting it if you want cheap practice with your AR-15 type rifle. Its a great way to practice indoors with your AR-15, though if the lack of accuracy is going to bother you then I would recommend getting a dedicated upper which has an appropriate .22 RF chambered barrel and still uses the same basic bolt design you see in the M261 conversion. This option would be a good way to go if you planned on shooting it more often than not. If you are already happy with your 10/22 rifle or other rimfire rifle and are thinking about a conversion unit I would suggest spending the money on more ammo instead. The unit works well to get familiarization across to beginners in how to handle a magazine fed semi automatic rifle. It would work well for small game hunting but not to any great distances, it would behoove you to have a proper .22RF rifle for that. I do not have pictures of any targets shot for accuracy but I will post some at the end of the week when I get to the range again. 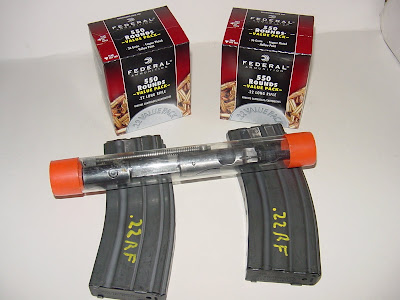 Posted by Wonderwolf at 8:19 PM 6 comments: Links to this post