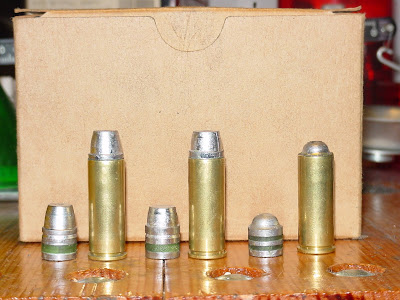 The lee 252gr Mold has too much body/shank and not enough ogive/nose. It therefore does not stabilize enough from what I can tell in the tests I have run. it seems to just tumble out of the barrel which ends up as poor results and keyholes on paper. I'm not sure what is causing this but my guess as stated before is the nose to body proportion.

The 200gr SWC's offer a nice plinker load and the 230gr RN is a nice bullet as well. The king of the crop so far is the 454424 Keith style 255gr mold with its generous meplat and sensible size of driving bands lube grooves and ogive. It is accurate with 2400 powder but non of the Unique loads I loaded and tried seemed to work all that well. The slower 2400 powder worked just fine and gave a good performance. Though further testing will be done until a all around load is settled on I imagine it will resemble a load right out of Sharpes book ("The complete Guide to handloading" of which I now own several copies). Black powder loads are a thought though but will be given no serious place outside of the accuracy testing and general range work. My goal is a accurate load that will have stopping power suitable for anything in North America...yes I may be guilty as being another person trying to magnumize the 45 Long colt but I think its a not so much of a question as can it be magnumized as a challenge.

Shot loads are something I plan on working on as well. Though #12 shot is ideal for any handgun or revolver shot load...I have access to only the shot I have from breaking down range pickup shotshells that were discarded (So anything between #6's and #8's I'm guessing). A 45 gas check will be used as the top wad and if I can get away with it a cardboard wad will be used as the lower. Although my concern is the fit of the lower wad keeping powder from working by. Perhaps a 45 wad punch should be invested in as I would use it for wads for the sharps as well as for punching out wads for this beast.

I am not the greatest shot with this Ruger BH yet. My natural point of aim and hands are so used to S&W grips and balance that this is a whole new horse I have to learn. It really seems to like the heavier bullets though I have not been able to go any heavier than the keith 255. A lighter Keith style 454423 mold has shown up at my door and bullets have been cast, lubed and sized. I need to get some serious target work done to compare the lighter bullet to the heavier Keith although I'm thinking the heavier bullet will outperform this slightly lighter brother. But only burned powder and punched paper will be able to tell.

So far I've been going over just caliber and bullet follow ups. The gun itself seems to be getting better with time. Grips are still going on and off of it until I find something that really feels natural to my hands. The sights are ok and what little midrange shooting I did with it last range trip I was happy with the results. 4 out of 6 shots hit the clay pigeons I was aiming at at just under 50 yards.
Posted by Wonderwolf at 6:11 PM 1 comment: Links to this post 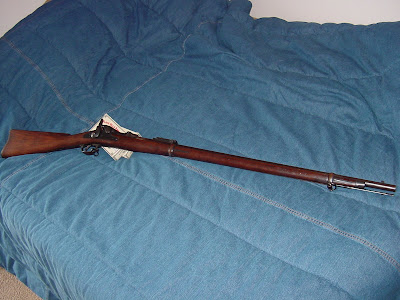 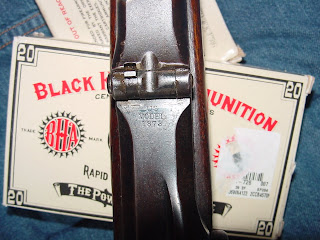 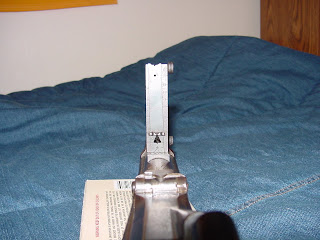 After obtaining the 1874 Sharps Long Range Express rifle only a few days ago I had it in my plans to sell the H&R 1871 45-70 that I started with. A mentor friend (Doug) who was at the same gun show that I purchased the 1871 at told me if I ever wanted to sell it to let him know. So last weekend when I went home I caught up with him as he was still interested in the rifle. But he didn't have any cash handy though he offered up a partial trade. What did he have to trade? A Original Trapdoor Springfield either model 1878(73?..stamp is in question..see pic) or 1884 (I'll get to this in a bit). I looked the rifle over as best I could with a bore light and such. Doug never shot the rifle as he was afraid to after hearing stories about the weaker actions. I was well aware of the stories myself but have never heard of any specific cases only that the trapdoor action failing. For 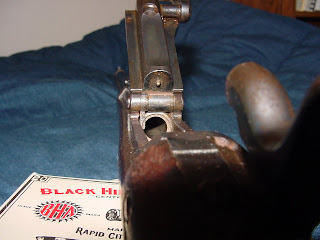 some odd reason I actually traded the H&R 1871 and $100 for the Trapdoor Springfield that Doug was afraid to shoot...this all makes sense so far right? trade a working rifle and $100 for something that was more than 100 years old and people are afraid to shoot...hehe. So I take the rifle home to take a closer look at it.....it looks like somebody took a pipe wrench to the rear of the barrel at some point in time though there was still life left in the 3 lands and grooves in the barrel. Then my dad saw the rifle....."You got a Trapdoor Springfield....my son is an idiot" was pretty much what came out of his mouth. I was taken aback greatly at this comment. My father #1 called me an idiot on a choice of firearms.....that just does not happen. And #2 my dad who is a Civil War Expert/all around History buff looked down on the Springfield trapdoor so much as to call his son an idiot who had just obtained one (eh maybe those 2 reasons go hand in hand...I dunno). Now what have I done?...did I make a mistake? Looking over the rifle the front sight is very thin and the Rear Buffington adjustable sight looks like something a target shooter would greatly appreciate but perhaps not a foot soldier. The action locks up just fine and the big 16 ton hammer is that of the 3 click tumbler model. First is the safety I assume then the notch that allows the action to be opened then one more back and the hammer is ready to strike the firing pin and fire the rifle. The only thing missing so far as I can tell after taking the rifle down is the ejector spring and pin that helps the ejector kick a fired case out (lathe project). Right now all I have is an extractor instead but thats not going to hurt me anytime soon. I figured I would go ahead and slug the barrel to see what I have to work with. I started the first of the 3 round balls I usually 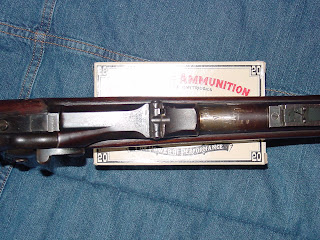 run through a barrel to get bore and groove measurements. 3/4 of the way down the barrel was just fine the slug went in and on its way down with little force after taking the initial shape at the muzzle. Then about 5" left till the breach it stopped....dead....I gave the 1/4" brass rod that we use for slugging rifle barrels and gave it a good "ram rod" motion and the slug pushed its way down and out of the action. I took a look at what I had and I was dumbfounded. A good sized groove was carved into the slug at 6 o'clock and at 11 o'clock. We thought it must have just hit the ejector ramp or something so we pushed the other 2 lead balls through the barrel carefully. Same thing. I then took a closer look down the muzzle with a small flashlight and saw the culprit. A solid burr about .03" high was sticking straight up near the throat of the chamber....The very LONG chamber I realized. The burr at 11 o'clock was very hard to see but it was much smaller than the 6 o'clock burr. Were these related to the tool marks on the outside of the barrel? and perhaps the long(er) chamber? which is over 3" long by the way. I really would like to get this rifle back into working order. I think it still has life in it but I will take the same precautions with this as I did with the Damascus double barreled shotgun I cut down due to a flaw in the barrel. No need to rush things but Depending on further observations we will see if the burr will shoot out or not. Though I think if one can be had and done at a reasonable price a barrel liner will be in order if things do not play out well for this fine old rifle. Also the tang needs some attention due to some seperation from the breach plug. 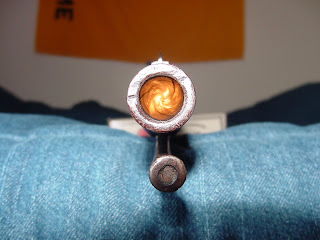 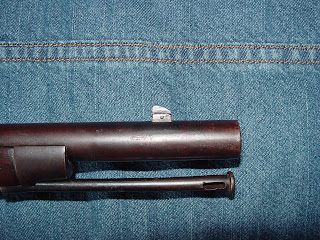 Now on to the model of the rifle. In the little time I've had to research the rifle I have narrowed it down to 3 years though most likely I'm thinking its a 1884 due to the rear sight and serrated trigger. The breach block appears to be dated 1878...however...the 8 looks a bit like a 3 further research is needed on the breach block to determine its year. However it will not dictate the year of the rifle overall. since parts were made standard and could be swapped around. Follow up articles to come!
Posted by Wonderwolf at 8:20 PM No comments: Links to this post