My take on the AR Dissipator : or : Dissy from M4 barrel homebrew edition

I've never been a HUGE fan of the M4/AR-15 platform, I've been shooting a BCM M4 carbine barrel with iron sights for about 5 years now on and off when the need for a 5.56 rifle comes up (3 gun matches etc).  I thought I was really liking the idea of the A2 rear sight set up and the compact 14.5" barrel with 1.5" flashhider soldered on but the shortcomings of the sight radius kept bothering me.

A few M4 barrels came my way and I thought it was time an AR-15 rifle that I would be more apt to get along with. A 16" barrel with rifle length sight radius using A1 sights (yes A1...the A2 I have found is not useful outside of high power matches) A phantom 5C2 flash hider and a place to hang a TLR-1 Streamlight flashlight was all I was looking for. Put that package atop a M4 lower and we might just get along.

A M4 barrel does not have cross pin holes to mount the front sight/gas block where it is needed so step 1 is to drill our own  and spaced so we can still put handguard halves in place. That is step 1....and that is where I messed up. The M4 barrel that I got came from a very well known manufacture and as such I thought their gas block (it was just a gas block no sights) would have been drilled/mounted true to the barrel. They were assuming however whoever was getting the barrel would slap optics on it and call it good, never having to worry about the gas block being level with the world.

My mistake- I drilled the first hole and mocked it up realized that I was true with their holes but not perpendicular to the sight line. I will explain how I fixed this further down.

To align the work I dropped the reamer in the hole then centered it to the chuck and made sure the run out was good for the length of the barrel. 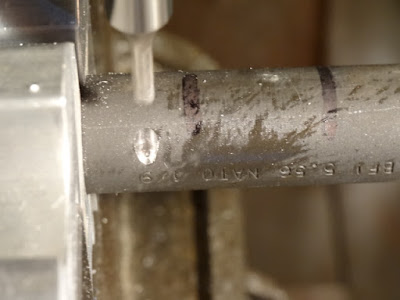 Ok, so as far as I know the above is in theory a good way to do that job without a jig (jigs are about $125ish iirc) What follows is my solution to the problem I created when I drilled the first hole and confirmed on the 2nd. The problem was when mounted my sights were canted 7° to the right....because that is how far off  the factory holes were. So I needed a way to insure that the holes I was drilling would give me true and level sights. The dissy has a 16" barrel, you're not going to be mounting a bayonet on this sucker. so I cut the bayonet lug off my donor front sight (inert gas block) and filed flush. Next I drilled and tapped for a #10/32 set screw and with the barrel in the upper and assembled I cranked down on the set screw with the block EXACTLY where it needed to be. With the gas block acting like my drill guide I mounted the barrel back into the mill and drilled 1/8" holes all the way through, got myself some 1/8"x3/4" roll pins, drove them in and  declared victory on what could have been a blunder. The sight is level and with the set screw in place its simply not going anywhere.

Step 2 to finish the upper assembly I taped the old gas tube port #10/32 iirc (no drilling required) and mounted the handguard endcap right on the block. 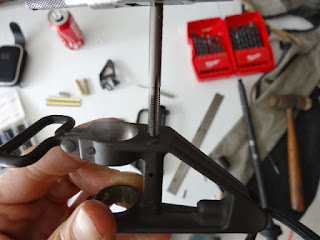 The Dissipator has been a design I've often wondered if it were right for me, and as usual a off the shelf item rarely works for my needs/wants. If you're not going to run irons then the dissipator is just a way to get a standard handguard onto a carbine length set up. Not much appeal to the red dot/optics crowd which makes up a lot of the AR-15 crowd.

Below are some pictures of the rifle after some range time, initial zero and a rattle can spray job with 2 coats of matte flat enamel applied (seems to work so good so far). Since this rifle is going to get used more I wanted to test out the spray can camo job on this before I tried it on other more costly firearms.

As a closing thought, when spray painting a hasty camo job do not use non camo labeled paint. I thought the red that you see would be flat enough, in person it looks it but the flash really makes it stand out. it was the only color applied that was not labeled for "camouflage".  The rifle has been out to the range several times and the combat zero I decided on has been working out perfectly. Only time will tell but I think I've come up with a set up I'll be pleased with.

Posted by Wonderwolf at 12:31 PM No comments: Links to this post

For awhile now I've been painfully aware of how handy a powerful light source can be on any firearm you may employ in defense of your self/home. About a year ago I invested in a Streamlight brand TLR-1 tactical weapons light. This was the first dedicated rail mount compact flashlight I've owned and I honestly couldn't be happier.  I have not been happy with the price points of mounts for various platforms that I wish to be able to install the light on so of course....I'll try my hand at making my own.

From the depths of the parts bins I came up with a picatinny rail section (Weaver 61A) that I happen to have a bunch of new in the bag that seem like they will work perfectly for the donor rail section for my little project. My goal was to make a standard magazine tube/barrel clamp mount. I started with a large chunk of aluminum and figured my cut spacing and went ahead and drilled the holes for 1/4" hardware.


Using a woodruff key cutter I experimented with how the best way to cut the block for the tube reliefs. Needless to say this was a bit of trial and error. Somewhere my measurements migrated a bit and I was about 1/16" off relief spacing. This being the prototype it was mostly proof of concept and the future versions would be vastly improved ie thinner and closer fit. My cost is time and about 20 minutes of machine time and its all metal as opposed to the plastic jobs I'm seeing around. Only bad thing is it does not act as a barrel clamp

Just a quick proof of concept project I wanted to knock out, next version should be a lot better.

Posted by Wonderwolf at 11:24 AM No comments: Links to this post