Gunsmithing as I mentioned earlier is a practical hobby and skill (kinda) I enjoy. You definitely have to have a feel for it. Though I'm not a master at it I'm fairly in tune to the workings of a firearm and what makes them work and tick. I've worked on a goodly amount of firearms in my short time on this earth but there is one gun that no matter WHO is using it....It will never FAIL TO JUST SIMPLY WORK. The AK-47 Family of firearms has been a popular gun for the home builder lately. For about the same price as buying one off the shelf (so to speak) you can build a legal semi auto AK-47 (so long as you have the pre required tools to do so....we did....and then some) In the case of the RPK I have $254 in it exactly 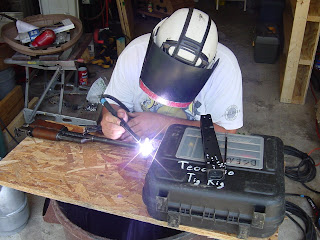 Usually to build one of these AK's or its clone one needs an assortment of punches and hammers. Cold chisels, a good anvil, leg vice or LARGE table top vice, welder (optional), large case of Mt. Dew, hydraulic press, $0.23(0_o) in pennies or so to use with the press to protect the barrel and perhaps an adapter for a air hammer to rivet rivets in.

The above picture shows my very good friend using a tig welder to weld up the front sight on the RPK after I atempted to remove it to install the new bipod (one was not installed when I got the kit). I gave up and simply busted the rivet out of the bipod to install it.

This being the 3rd AK clone that we've built we tried something a little different when it came to the receiver. In the first place it was the wrong receiver it was in fact one that was intended for a folding stock AK however it was on sale and I needed a receiver for the project (cost was $40). To fill/patch the large holes we cut and ground patches out of the old receiver which was actually a little thinner than the new receiver...not sure why. But after the receiver was patched up I had Anthony just weld the rear trunnion in as I did not want to mess with locating and drilling holes for the rivets that had to be put in! 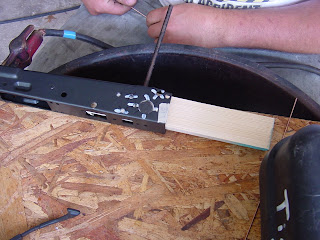 The RPK's actually had the front and rear trunnion spot welded to the reciever so I had my friend spot weld the front after I drilled holes in the receiver. It serves to stiffen up the receiver being the RPK was built as a LMG( in theory). Now you gotta remember this was a Russian design made for the dumbest peasant to use. These things JUST FREAKING WORK. I've yet to have a jam in any of my builds, however we did run into a problem with upper rail length in my friends Romy G but that was fixed with a buffer welded in front of the rear trunnion so the bolt would not pop itself out of the reciever.

These builds are fun and if you have the few tools that are needed it can be a relativly painless build. The first one I did (the Yugo underfolder) proved to be a hard first build as the folding stock assembly had a lot of jesus parts (JESUS....small part springs across the room) 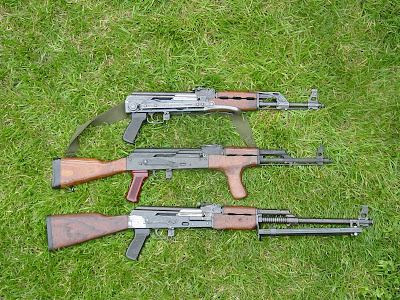 Posted by Wonderwolf at 10:24 PM No comments: Links to this post 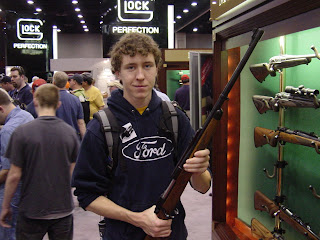 Awhile back the NRA held its annual Convention. This year it was in Louisville Kentucky and well within a tactical day road trip for my dad and I from the mid Ohio region. We get there and the size of the show is just enormous. I enjoyed meeting and shaking hands with industry leaders as well as famous faces. The convention is a great place to get Q's answered and handle and get a close up look at firearms you've always been curious about or interested in. My wish list grew a little bit as I looked over a few big bore rifles and reproduction's that really caught my eye. 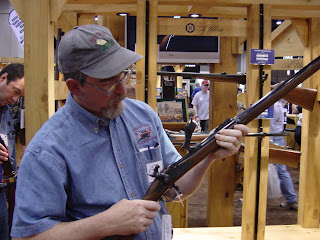 Here we see my dad taking a close look at a Trapdoor Springfield reproduction by Uberti. As you can see by his hat and shirt he is a Artillery buff (watch for future articles on his heavy weight hobby this summer). The convention did not offer a lot for sale although I did purchase a book or two that have been on my wish list. All the big names in the firearms industry was there. Sig, S&W, glock (with the gunny)...and all sorts of poster girls going through sharpies like dirty underwear signing posters. I got to handle some very unique weapons as well as classics like a Merkel Double rifle, Thompson's and sharps rifles. As well as view a display of older S&W revolvers. The various CZ 550 models on display really caught my eye. They seem like a good solid rifle with lots of options including express sights. My focus was mostly on the Big bore magnums. Here we see ones chambered in .404 and .500 Jeffery. Impressive to say the least! 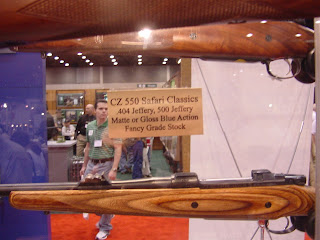 The whole convention was a very worthwhile trip. But I would not go out of my way to travel long distances for it more than once a decade. It's nice to see what is out there and see famous faces in our culture. But unless the convention showed up in my backyard again I won't make a point to go. Though if you get the chance please do go. Take the kids, a Camera, backpack and a notebook. There is something there for everybody and you will have fun. Take somebody who is just slightly interested in firearms. They will enjoy themselves. Here is My Dad again with a marlin guide gun in 45/70....we ended up seeing the whole show and getting back to my apartment in less than 12 hours. 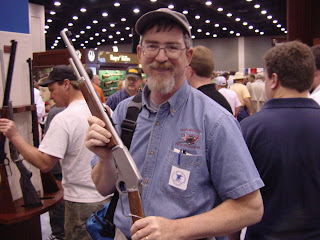 Posted by Wonderwolf at 8:02 PM No comments: Links to this post

My good friend who purchased the 6.5 Carcano I mentioned earlier on this site has also been longing for a Japanese rifle as well after seeing his grandfathers WW2 war bring back in his relatives small gun collection. I kept half an eye out for a rifle that would suit him and me being a rather patient person I happened upon a listing of a small Japanese rifle collection that was being sold. I called and inquired about the different models and such but the seller didn't even know all that much about them other than one was "big jap" and the other two rifles were "little jap". The prices given to me on the phone seemed reasonable so I told my friend to get out of bed and that we were gonna go look at some guns today! 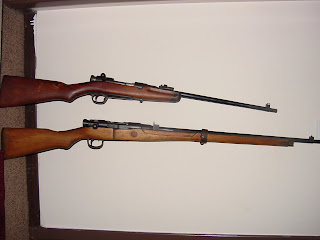 I looked the 3 Japanese rifles over as well as the other WWII circa rifles that the gentleman had up for grabs but I was focused on the 7.7 jap type 99 rifle for my friend. We agreed on a price for it and then I looked the little type 38 6.5 carbine over..."I have no use for it, and I don't need another groundhog gun" But I put down a offer thinking he would pass on it but he took. We walked out of there paying $140 for the two rifles and me thinking...."I really shouldn't have done that"

I don't know what possessed me to randomly purchase a rifle of such vintage and origin but I did. And like most people who do random things they try to rationalize their decision "it will make a great groundhog gun" I told several people who asked why I had purchased it. Then upon reading "Bolt Action Rifles" by De Haas I came to the conclusion it was a perfect plains game rifle round and barrel length. And that it is indeed one of the strongest rifle actions ever made! Bullets I have as they will be cast from the mold we got for the 6.5 Carcano project. Brass will be made with anything with a base diameter that is appropriate for the 6.5 jap and is long enough. pretty much anything that uses the 30/06 as a parent case will work. .270 winchester being the top pick from what I can tell. Run it in steps through the sizer die and turn off the remaining belt in the lathe at home. I have a goodly amount of range pick up brass to make both 7.7 jap and 6.5 jap brass from though I should think no more than my friend shoots that 50 pcs should be sufficient for him and I think 50pcs should do for me as well. 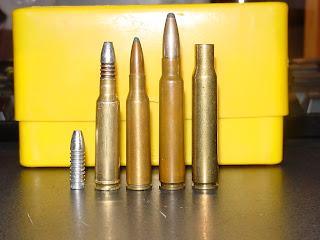 Above you can see a 6.5 Cast bullet and a 6.5 that is lubed loaded into a modified 22-250 case that has been run through a 6.5 carcano sizer die to form a belt that has been roughly hand filed off. The Carcano head diam is only .001" larger than that of the 6.5 Japanese. Next to the dummy round is a 6.5 Japanese round by Norma then a 7.7 Japanese round. 30/06 brings up the end to show case size comparison and conversion feasibility.
Posted by Wonderwolf at 6:26 PM No comments: Links to this post