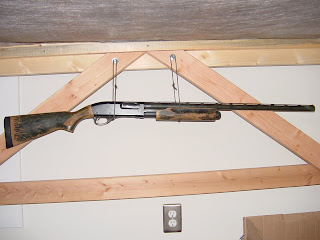 There are few reasons these days why an off the shelf shotgun with a mid length barrel and 3 or 4 round magazine would not suffice for a home defense shotgun for the average home owner or apartment dweller ( Ammo choices need to be kept within reasonable limits as over penetration can be a factor in thin walled apartments). For the average gun enthusiast an off the shelf HD shotgun would work....however we are not the average gun enthusiasts that simply purchases a ready made HD shotgun off the shelf. Now I'm not talking super tacticool with quad picatinny rails and a GPS unit with the newest bottle opener that whatever tactical unit deployed somewhere your not supposed to know where they are, but somehow you do because you have "friends", uses and swears by and as such every other armchair warrior will discuss at length as to why its better than the same tactical bottle opener made by Mall Ninja gear outfitters inc. I'm talking about something that is practical as a defense shotgun recycled out of a field shotgun that maybe has seen some better days, or something you simply picked up at a gun show or pawnshop for a song. In this case my "seen better days shotgun" is an 870 Remington Express Magnum, This version was built with a cheap finish and cheap wood or synthetic stock depending on what the customer wanted. From what I can tell it was built to compete with the Mossberg 500 line of shotguns.
Although its the Remington brand "economy version" to be honest looking over the shotgun it looks and feels like its a well built operational shotgun that just got a cheaper exterior finish and slightly rough internal workings as working the slide some things will need smoothed out! I picked up this full vent ribbed 28" barreled Express magnum 870 at a gun show for around $150 which I thought was a nice price even though cosmetically it was rough. I've owned a old Westernfield (Sears brand) Mossberg 500 clone (One of the better ones) for a few years now as a combat shotgun and have owned other true Mossberg field guns but have sold them as I've gotten away from shotgun's for occasions other than social emergency's. Any field hunting I would do would now be with a double barreled side by side that was gifted to me while I was in High School.


Here we see the painted stock and barrel and get an idea
of the overall condition of what we're starting with! 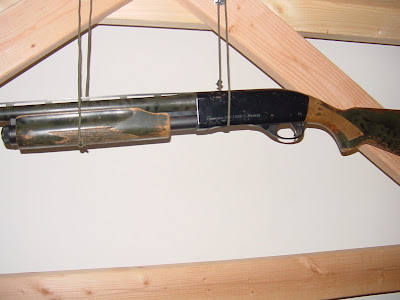 I couldn't help but pick this 870 up with the idea to resurrect it as a Defense shotgun for a easy project. Wanting to keep the conversion as cheap as I could but using components I know have been proven I first decided to change the stock and forearm out. I hunted around online stores and auction sites for a set of Choate (Choate machine and tool) stock and forearm as I know their older version fits me well as my dads combat shotguns sports their stocks. They are slim and the length of pull fits me well. I picked up a set of Choate's older version of their pistol grip stock and forearm for around $55 after shipping. Installation was easy but did require a little tool to install the forearm nut. Now the gun fits me better and the pistol grip keeps my thumb away from my nose, Buck shot and Slugs had beaten my nose up in the past with the shorter pull of traditional stocks and the subsequent placement of my thumb. ( pics of stock set up to follow in part 2 as I've deleted all the pictures from my camera at this time on accident.)
We have a nice start dressing the gun up for slightly more social occasions other than the old dates it used to keep with turkeys and dove. The next step in the project is to smooth out the action as it still seems rough like it came from the factory and seeing the lack of wear on all the internal parts this would lead me to believe that the gun might have been carried for a decade in the truck but only a few boxes of shot have gone through it. There are several ways to go about honing the internals to smooth out the workings of the Remington 870 but my method was a bit course yet very effective. Using the finest sand paper I could get my hands on (from my tool box) I rubbed the abrasive off into the action and worked it several times. Yes it wears the finish down but we're going to refinish the whole thing so no worries there. I was careful not to take things too far with this process as it does not take much. After I had done this a few times I took the entire gun apart and gave it another good cleaning. Even before I applied a light coat of oil the gun cycles much smoother and did not require as much force to pump forward as the bolt used to stick towards the rear. After this process is complete I made sure to get all the remaining grit out of the action and trigger pack as long term damage can result from it being left in.The next step will be to alter the barrel and get the gun ready for a Parkerized finish which will include sand blasting the whole works.

Posted by Wonderwolf at 7:11 PM No comments: Links to this post