The following is a picture heavy step by step "how to" load a shotgun shell on a Lee Load-All II shotshell press. This is basic stuff, I have already installed the correct shot and powder bushing as reviewed in THIS post on my blog. This is to show both instructions on the use of the press and just how simple it can be to "roll your own". If you want info on loading buckshot 12ga "OO" buckshot on the cheap click HERE

A trick to the Lee Load-All shotshell press

In a previous post about loading buckshot (found here) I used a Lee Load-All II shotgun press that I had purchased new. If you have found yourself with one of these presses (which you can get cheap used) this post is a overview of how best to go about getting started with your selected load. As well as 2 handy tricks for getting where you need to be with your selected powder charge.  The first trick is how to make sure you get consistent powder drops the second is how to switch out powder bushings without much hassle.


Before I go any further there are better presses out there to mass produce shotgun ammo on, I have gone with the Lee Load-All for the simple fact that I do not want a larger machine taking up space nor do I want one that has all the bells and whistles, if you have read much more of my blog you will understand I like simplicity. Also the 2 presses I have now plus their conversion heads have combined cost me under $100....thats $100 for two presses that can load 3 gauges.

The Lee Load-All is a simple press that comes with everything you need (except components) including powder and shot bushings. When I had obtained my first Lee Load-All it came in 20ga....now I didn't need a shotpress in 20ga....I needed 12ga. Luckily Cabela's conveniently stocked the 12ga conversion head there as well......I smelled a bit of a marketing scheme but I digress.  The Fact the press is easily converted between gauges appealed to me. I later on purchased a 16ga conversion head so now I had one press the size of a long thin shoe box that could load 12ga, 20ga, and 16ga......pretty slick huh? I wont get into the parts swapping of the conversion here (just yet)  but you know the story, you get tired of changed around the parts and start looking for another press. A few months back I stumbled upon another press, this one was set up in 16ga and was missing the sizer ring, had everything else bushings and even the instructions, but was missing the sizer ring. No bother I had a complete 16ga conversion already so I slapped down my $8 for the lot (I did say you could get them cheap, didn't I?). Since I don't even own a 16ga shotgun I decided to convert the press over to 20ga so now I would have a dedicated 12ga and 20ga press.........the 20ga press will get converted whenever I need to load 16ga ammo.

The priming system on the LA can be upgraded to a primmer feeder as pictured below, this allows you to load a couple dozen primers and with a simple jiggle and lift of the trough you will feed the next primer that will automatically be seated with you move the shell into the 2nd station.


The powder and shot bushings are in Lee Precision fashion, formed plastic. These are labeled with numbers, as I will get into here in a bit you will find the powder bushings are off by what the chart claims causing you to throw a lighter charge of powder than you were wanting, I will show how you can quickly get to the powder charge you want without undue hassle (like emptying out all the powder every time you find you are throwing the wrong powder charge). 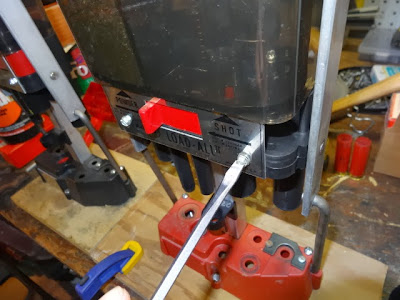 Step 1: Remove metal face plate from the front of the Loader

Step 2: put in the starting powder and shot bushings you intend to use

Step 3: Replace metal face plate, ONLY put the powder in the hopper DO NOT PUT SHOT IN YET! 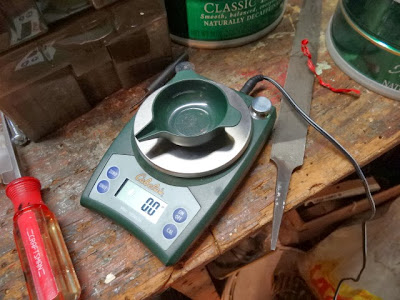 Step 4: With spent hull in place cycle the charge bar a few times and dump back into the hopper. Then dump 1 charge and.....you guessed it ....weigh it

Step 5: The LA press will give you 2 weights of powder depending on the type of powder you are using if you just throw a charge without depriming the case and sizing it first your charge will be light because the powder is not settling as the press is being manipulated. I proved this by simply throwing 3 charges all weighing 13.8gr of unique Then actually going through and sizing and priming a case AND THEN priming it....same powder bushing dropped 14.1gr consistently. 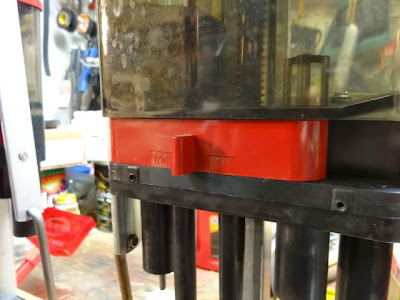 Now if your load is calling for around 14gr of unique I would stop at that point, but the load I am using is calling for 15gr of unique.....but I already put powder in the hopper? I don't want to dump it all out and dump it back in and possibly spill powder all over the place if it can be avoided. I want to jump from the .105 bushing to the .110 bushing. Here is how you can go about that without much hassle.

Step 6: With the charge bar moved to the right so the powder bushing # is showing remove the faceplate.
Step 7: This is why we didn't fill up the shot hopper (shot would be pouring out right now if we had), with the face plate off rotate the charge bar so that it pivots underneath the hole the powder drops through. Now the powder and shot bushing should be exposed, pop out the powder bushing and replace it with the one you want to try next.
Step 8: Cycle the charge bar a few times with a hull in place and dump in the hopper. Now take a hull run it through the first 2 stages, prime and then dump the powder charge and weigh. If you have thought ahead at this point you might say "hey, if I size and prime a bunch of cases and do not load them how am I going to load these and get the correct powder weight when I do load them". One solution is to use one scrap case and run it in the first 2 stages over and over again to give the press the jigging and jarring it needs to get the powder to settle, it is how the press was designed to work.


Now that we have a the powder charge weight we are looking for we can fill the shot hopper with the desired size shot and begin loading.

Posted by Wonderwolf at 6:16 PM 2 comments: Links to this post