Part 2: From Doves to Defense-Finishing Touches 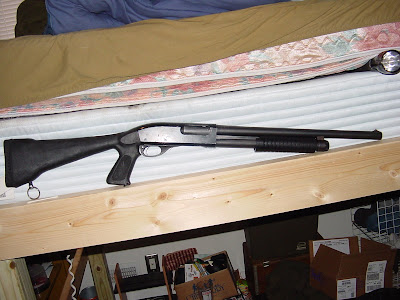 "Subject to change without notice" is something I always keep in mind when told something or giving information to others. I had talked of chopping the full vent rib barrel down to use for this project but I managed to acquire a factory 18" 870 combat barrel from a gentleman at the local gun show. I got a straight up trade on the 18" barrel for my 28" field barrel which would need a new bead after the chop. So I'm sorry to say you wont get to see pictures of 10" getting hacked off of the field barrel. I simply took the 870 in the gun show with me to see what kind of things I could find to help my project along. Taking the gun to the show when you are looking for parts for it is a good idea as in the majority of the cases you can make sure its the right part before you leave the table. And in some cases especially if it is a "Jesus part" (the word uttered as it springs across the room never to be found again) the person selling the part can install it properly for you for little or no cost.
Now we have something that looks a little more like a combat style shotgun we have a shorter barrel that will be handy in tight spaces and a stock that keeps the thumb out of the way from bashing the nose. The next few things are not needed but since I have access to the equipment I figured I should refinish the receiver in a parkerized finish. Parkerizing helps protect steel from corrosion and wear and is pleasing to the eye as you will see in the following pictures.

870 Receiver before being sand blasted and parkerized. 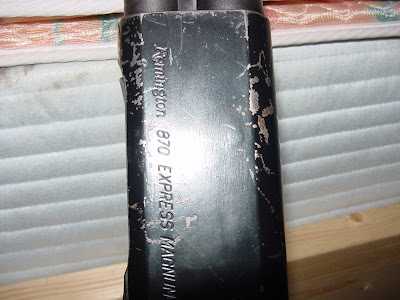 After being sandblasted and parkerized. 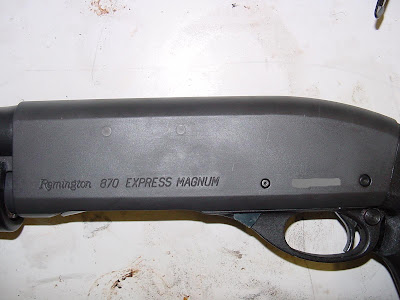 We see just how much better the receiver looks with just about an hours worth of effort put into the gun. The cheap painted on finish would not have lasted very long with the rugged storage conditions and use the gun will see. The gun appears to be a new off the shelf police or military model. But in fact little over $200 has been invested into the gun so far. I understand that not everybody has the access to equipment to do these kinds of things but I feel that anybody resourceful enough can come up with ways to do a durable finish such as this. I did not bother to parkerize the barrel as it had minimal wear but I did refinish the bolt and forearm/rails. The trigger pack/guard is aluminum and does not take the parkerized finish. Along with the 870 I also parkerized the RPK a friend and I built over the summer. The key to getting a uniform finish on the gun when you parkerize it is making sure you use a good quality brake cleaner after you've bead blasted to remove all the oils and dirt. Although I took my time in doing all the prep work the right way that did not prevent somebody else from putting a part on top of my receiver while it was in the park tank. A small blem is the result but it will not harm anything in the long run. 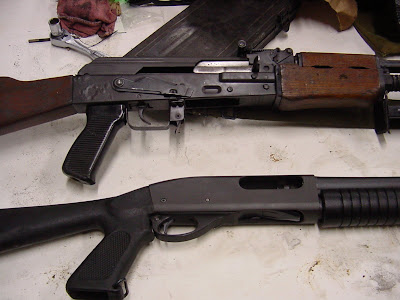 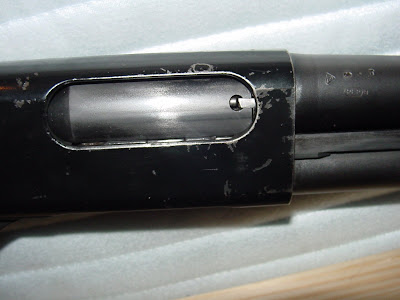 The last two pictures also show the right side of the receiver of before and after. From this point on we are pretty much finished with the project that I had set out to do. A magazine tube extension is optional to add a few additional rounds to the gun. I happened to have a factory magazine tube on order that is only adding $20 to the whole project cost. $225 is the total investment after the tube extension shows up. Not bad when you look back at what we started with. A 3 point sling might be made but only used in combat matches where switching from the shotgun to another weapon may be required. The 3 point sling will not be on the gun for its home defense role as it has no role on a gun you might grab at 3am unless you are putting on a whole battle outfit with sidearm (rolls eyes).
Posted by Wonderwolf at 6:25 PM No comments: Links to this post