Each year the big handgun manufacturing companies produce new updated models and generations of their products and really push to get their handgun in the holsters of the law enforcement officers and swat teams around the United states. Some departments upgrade every so often and upon doing so might choose to sell back their carry guns if they are switching to a new model or make. Police trade in weapons are common at one of the bigger gun shops here in Columbus and I try to keep my eye out for these as they are some of the best deals around. They are kind of like mil-surp but not as abused or dropped as much (as the case might be with some french firearms ararar). The latest addition is a Beretta 96D in 40 Short and weak....er I mean S&W for short....or wait what did I mean? The D is a Double Action Only (DOA) firearm. This particular set up has no safety other than a fireing pin block, Where if the hammer was pulled and released or the gun was dropped and the trigger was not being pulled the firing pin would not strike the primer. I aquired my example after a friend picked one up and allowed me to try it out. I liked the mild recoil and simple controls (lack of safety and easy break down) and the price out the door $277 didn't hurt. I figured one would be a welcome addition to the line up. The gun came with 2 mags and some holster wear which is fairly common (duh). And since another person carried this gun everyday, trained with it, broke it in and proved it as it were I feel comfortable after I run it through its paces having it close at hand in a time of need. 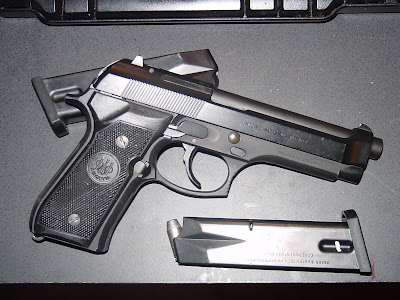 The other two police trade ins I've aquired might have been from a armored truck company or something of the sort. These are two S&W revolvers one being a k frame 65 (357 Mag stainless) and the other being a 10 (38Spl blued). The 10 I picked up first for $267 OTD, and the 65 was $264....REALLY good prices for S&W revolvers that have been carried more than shot. They show holster wear but the action is sound and the 10 will handle +p loads....which I've been feeding it on a regular bases since I like a 160gr full wad cutter almost going 950FPS out the 4" barrel. I've been using that same load in the combat matches with great success so far knocking the steel down in a hurry. The 65 has not been shot much since I only have 28pcs of 357mag brass on hand, most of which is on its 6th loading. 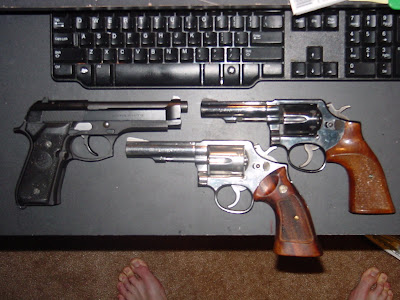 So we see here 3 great guns that have done their civil duty only now to be loaned to others and not dread their fate all for $808....The wheel guns are great for those learning to shoot combat matches or just want to plink. and the 96D will be great for trigger control training, yes the pull is heavy but if your a experienced shooter and don't like Glocks then this might be a good option for you.
Posted by Wonderwolf at 12:28 PM No comments: Links to this post

I have not had hard wired internet to my computer for a year..today I finally wired up the network cable in the new apartment. So I'm gonna get back on here and try to get new stuff out now!!!!!!!

While sorting through a small container of .223 brass that has been buggered up too much to use again for .223 reloads I got the idea I would try out a set of .300 whisper dies that I got for a good price not long ago. .300 whisper is the .221 fireball blown out to 30 caliber if I remember correctly and therefore much shorter than .223 Rem. Long story short I did not use enough lube on a particular brand of brass that tends to have a soft case head and rims are easily stripped off. The die set was a RCBS set where the decap assembly and expander ball goes out the bottom of the die. SOOO if you have a stuck case in the die...you can't take out the stem to use a stuck case remover. Esp if the expander ball is somewhat stuck in the neck of the case that is in the die. So my lathe to the rescue I turned the case head off as it was sticking out of the die still (duh?) 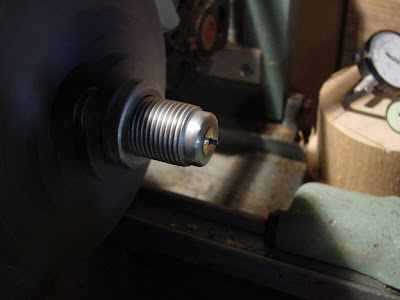 The next thing was to sort of bore out the last bit of case head so the stem could be removed all the way out the front of the die ( my dad pointed the fact I could remove the stem out after opening the hole up to 30cal but I was worried about wall thickness for my threads). After doing this a standard stuck case remover can't be used because I have successfully removed all the material it would have used to remove the case. 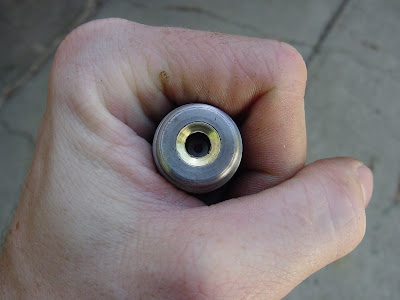 Next using the lathe I took the largest tap I could find and threaded the case that still resided in the die. You only need about 3 full threads and a bolt that is the right size for this. 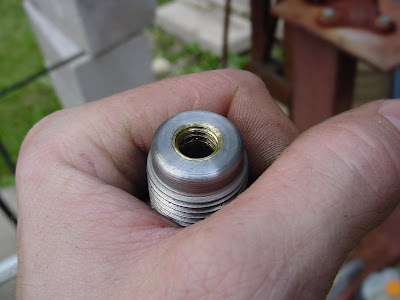 After that I tossed the whole shebang, bolt threaded into the brass and the die into the freezer. HA I did learn something in physics. After about 20minutes or whatever we put the die in a rubber jawed vise and with a brass rod gently tapped from above. After a few taps the bolt pulled the brass out with it and I cleaned the die and checked for any damage. 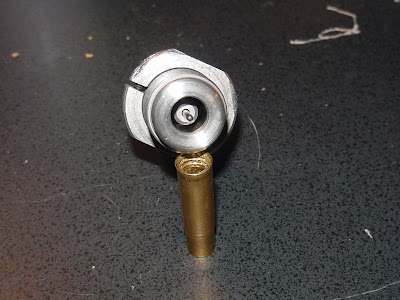 Lesson learned....USE enough lube...I've had this problem more than not lately.
Posted by Wonderwolf at 8:46 AM No comments: Links to this post