The devil is in the details : or : Redding competition micrometer seater die

I am not a benchrest shooter and honestly I don't want to be, I have nearly zero desire at this stage in my life to put all the bullets in one hole....I mean I pay for the bullets and they are made for punching paper so why not make sure you punch the most paper with them :) . All kidding aside there is a time for high precision, tight tolerances and exacting performance. But for what I do I need a balance between accuracy/tight tolerances and reliability. One thing I have realized though is with my match reloads I have a lot of variation in run out with my seated bullets which can contribute to the vertical stringing I see in my targets. I happened into a Redding competition micrometer seater die for a really good price after wanting to try one out for some time I snatched it up and put it to use right away.

The draw to this particular die is the fact you can control your seat depth by .001" and the literature included is a must read to set this die up correctly. It was as simple as setting the die up with a previously loaded round with my seat depth of 2.675" make two full turns of the adjustment knob which is .050" per revolution  and have a new seat depth of 2.775". In reading and looking over technical data my .308 handloads may have been seated a little far in so I'll be using the new die to load up accurately seated bullets from 2.675"- 2.775" and see if this hurts or helps my groups at all. Don't get me wrong, my 2.675" loads with 150gr SMK's shoot very well, but I'm wondering if they couldn't be a little better with a lot less jump .100" less to be exact. The gun I'm shooting these in might not care but only range time will tell.

Shooting these reloads out of a semi auto rifle that will eat just about anything you feed it I can only gain so much performance. No I'm not shooting benchrest but nobody has ever complained about a gun/ammo combination being too accurate. 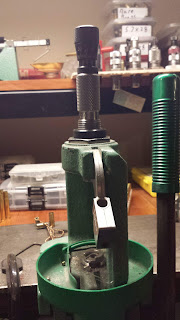 If you are on the fence about trying a micrometer seater I have to say off the bat they are a lot less of a hassle to get dialed in and are repeatable. If you load several different types of bullets its as easy as keeping notes of micrometer settings and dialing those in as needed. Game changer....

Posted by Wonderwolf at 7:06 PM No comments: Links to this post

Most of us know what to expect if we bring someone to the range that is a "Joe 6 pack" and maybe box of ammo a year kind of guy (or gal) and they bring that AR-15 or Mini-14 or XD they got during a panic ( just in case) and kept it locked in the closet with a few boxes of ammo and magazines still new in the wrap. We know that things are not going to go how "Joe" expects them to, ie everything running smoothly and no issues arising with their choice of equipment. Even well vetted and tested product lines have examples with issues that can be debilitating for the platform....  After you covered or reminded them of all the safety rules and how to use their particular gun and they start with one round in the magazine (then 2 or 3....just to be sure they are comfortable with the trigger and competent with their muzzle control) you move on to full magazines....this is where things can start to get interesting. Guns heat up....things start to vibrate loose or the simple process of sighting in the gun for the first time can uncover some ugly shortcomings of the chosen platform. Case in point we see below a borrowed example of very popular choice of rifle, zeroed for the first time since its production (presumably) and not one but BOTH of the set screws for the rear sight broke at the head with what was a appropriately sized screwdriver and amount of torque. This is something you want to uncover on the range and not anywhere else....gain confidence in your equipment before hand. Don't expect to get the same results in performance and reliability that you read about in that glossy magazine review of the firearm (or any other equipment). 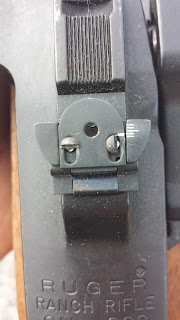 Insult to injury...the locking wedge loosened up and allowed the rear sight to walk out on us....done for the day with the MINI-14. I believe the owner will be replacing the factory rear sight with a Tech-sight brand rear sight for better durability and utility. 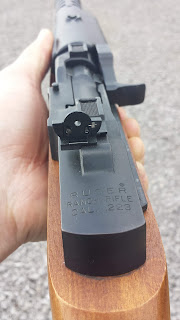 Factories make mistakes, This one shown below is a interesting one, you will notice the hole on the barrel furthest to the top of the picture has a very thin white line shinning in the middle of it. This is indeed light shinning through a hole in the barrel. The factory not only drilled the hole off center (the lower hole was one I drilled top dead center so the iron sights could actually be used)  they also drilled the hole too deep and broke through into the bore enough to cause a gas port where one was not desired. I noticed this after running about 300 rounds through this particular .22 LR and saw powder deposits emanating from under the front sight. Since I had done some other custom work to the barrel and already fixed the factory off center sight I doubted the factory would be replacing my barrel for me. .22 LR being fairly forgiving I decided to clean the hole as best I could, degrease and use JB weld (Acraglas would be a excellent choice as well) to fill in the hole completely. Using a cotton patch with release agent stuffed in the bore I was not worried about JB weld going through the crack ( I doubted it was viscous enough anyways) and mucking up the bore. When the epoxy was cured and I removed the patch I was pleased to see a very clean surface in the bore where the flaw had been. This was an issue that was easily repaired with little hassle and did not harm the accuracy of the rifle in any way,  If I had solicited a fix from the manufacturer it would have at the very least cost me shipping and insurance one way I'm sure. 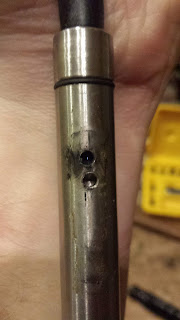 My point is you only know your equipment works correctly and as designed if you take it out and put it to work. Sometimes the materials used in your specific example are flawed causing a failure of the system to perform as intended. Sometimes the factory (even reputable names) have QC issues and allow lemons to leave the facility  and it sucks to be the unsuspecting customer about to put down hard earned money for a learning experience....to quote my dad though. "You paid tuition...now you're smarter". 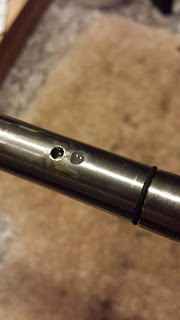 Posted by Wonderwolf at 4:06 PM No comments: Links to this post