Some more love from Slovenia arrived in my mailbox not long ago, in it was another BEAUTIFUL brass mold from MP. This one was a re-run of a  custom group buy from the cast boolits forum and there were several things that compelled me to get in on this. 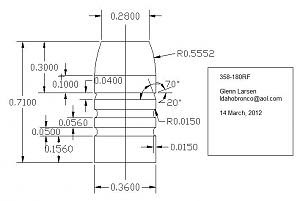 One is that it was a round flat nose profile....something that I've learned works well in both my bolt action .357 rifle and the revolvers. The bullets with a shoulder on them such as the 358429 Kieth styles though VERY effective do not consistently feed in my bolt action. The second reason is the weight, this boolit drops as a solid around 190gr and the HP variations are around 183gr depending on what style pin is chosen. This mold came with small and large round pins as well as the popular penta pin so there is some weight variation on the various HP options.  The higher weight of this boolit is attractive in both 38 special and 357 Magnum loads which lends much versatility in powder selections as well. Lighter boolits don't perform well with slower burning powders as they exit the bore quickly and don't always allow a complete burn. Something I've learned while experimenting with various barrel lengths ranging from 2" up to 18". Faster powders such as Red Dot and Bullseye can still be used with great success with these heavier options. Even the 230gr 38/357 loads I've tried have used a good dose of Bullseye which has proven to be a exceptionally versatile powder.

The meplat of this new addition of .2800" seems to be the widest that is permissible in my bolt action to reliably feed. Any wider and it would not mate up well with the factory barrel feed "ramp" of sorts worked into the barrel.

With the addition of this mold I feel like I've bridged the gap between the medium weight sport loads and the thunderous steer slaying weight bullets of 230gr etc...the one Keith variation of which does feed well in my bolt action oddly enough. This boolit loaded smartly especially for the carbine should handle any four legged creature North America has to offer. In the case of two legged creatures the 125gr boolit remains a good option for energy transfer and reduced risk of over penetration.  A sampling has been cast and about half are lubed and sized and loaded with 2400 in the 357 cases. I'll ladder load some others and see about a wet newspaper test.
Posted by Wonderwolf at 9:01 PM

Hi Wonderwolf, I happened across your blog while looking for reviews of the Lee speed die. I bought one in 38spl on eBay here in the UK as a novelty rather than for regular use. Your review explained why they are so cartridge-specific.
I've been reading your other posts, and I had never heard of MP Moulds in Slovenia. I've been on their website and their moulds look excellent. They are an attractive option for Brits, as they are closer
to the UK (faster shipping) and sales tax is an EU wide affair (until Brexit!).
Your 180gn design is not dissimilar from a mould I ordered from Accurate Moulds in the States about 4 years ago. My 5 cavity mould drops 3 X 175gn and 2 X 185gn round flat nosed. They are excellent in my Marlin 1894 357mag lever action. My 185gn is the spitting image of your 180.
Thanks for you posts and reviews,
Best wishes, Geoff