Recently there was a pretty good sale on S&B 12ga "00" 9 pellet buckshot loads that I couldn't turn down. Yes, I load my own buckshot but sometimes factory is good to have around for a touchstone when you're loading your own ammo and want to have something to compare it against...or run out of time to load ammo for a match.

The weather here has started to warm up some so I decided to take the 870 riot gun out and see just how S&B's buckshot did at various distances. My distances are a little arbitrary as I judged them to be the lengths of various household distances one may come across.  I did not see a reason to pattern the gun under 7 yards since pretty much anything shot under 7 yards with a shotgun is going to be a softball size pattern at most.  The distances I chose was 7, 11, 15 and 20 yards. Anything past 20 yards in my experience with the choke on this particular shotgun is asking for a buckshot pellet out of the "D" zone on a IPSC size target and would be a distance I would start considering switching to slugs.  As a comparison I also shot a Remington TAC-14 at 15 yards to compare the spread of the buckshot at that particular distance having considered 15 yards to be max for buckshot out of that particular firearm.

For the money I am impressed with the factory S&B buckshot loads, it's hard enough to find buckshot under $1 a round and always hard to find buckshot in 25 round box lots. It has long since annoyed me buying any kind of non specialty shotgun ammo in 5 round boxes esp if one resides in a state where they tax each box of ammo. Anyways, my results are pictured below, note the spread on the two 15 yard targets the riot barrel is a imp cyl I believe where the TAC-14 is cyl. Each test target does indeed have 9 holes in each one, the 7 yard target immediately below shows the wad strike as well, some pellets nearly doubled up but there are 9 holes. 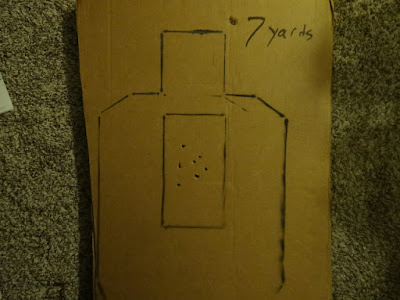 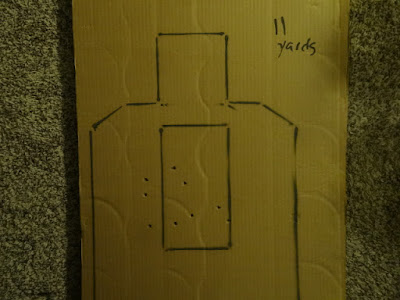 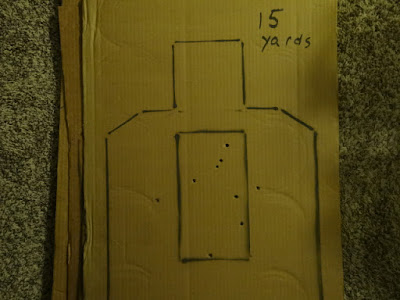 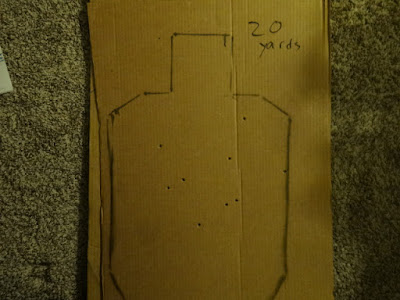 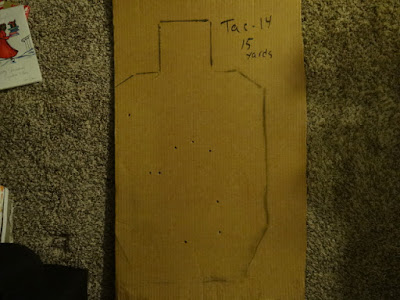 Posted by Wonderwolf at 7:57 PM